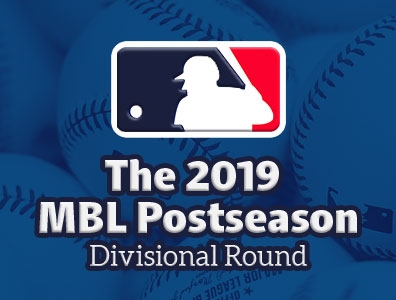 Now that we are about one week into the 2019 Major League Baseball postseason, it is a great time to review the wild card and the divisional round of the MLB playoff landscape. This is an update of all the scores, schedules, and analysis up to Tuesday, October 8, 2019.

The National League Wild Card game was a crazy battle between the Milwaukee Brewers and the Washington Nationals which was played in D.C. The Brewers went up 3-1 early on the Nationals, but the young star for Washington, Juan Soto, came to the plate in the bottom of the eighth inning with the bases loaded. Soto hit a line drive into right field which was misplayed by Milwaukee’s outfielder and that error allowed three runs to score and eventually win the game.

The Tampa Bay Rays dominated this game as the Oakland Athletics struggled to score. This was a very uneventful match up that ended the A’s season while Tampa Bay advanced to face the powerhouse Houston Astros in the American League Divisional Series.

This series has been back and forth with both the St. Louis Cardinals and the Atlanta Braves trading off wins as all of the games so far have been extremely close battles. Game 4 went into extra innings as Yadier Molina came up with some big time clutch hits to both tie as well as win the contest.

The Cardinals will send out their ace, Jack Flaherty, to the mound to start the fifth and final baseball game of this series. While Mike Foltynewicz will take the bump as the starting pitcher for the Atlanta Braves. I am really looking forward to this intense winner take all match up.

This series has been mostly defined by one team blowing out the other team as there have not been very many close games. Due to the lack of dramatic games this MLB postseason match up has been rather unentertaining, but hopefully the upcoming game 5 will be exciting.

The Washington Nationals will start Stephen Strasburg against the Los Angeles Dodgers who are choosing to pitch Walker Buehler for the fifth and final game of this series on Wednesday night from Los Angeles, California. The Dodgers will have underperformed in the MLB playoffs if they lose this game especially with their high paid roster and previous postseason experience over the last several years.

With the Houston Astros leading the Tampa Bay Rays 2 games to 1 they will most likely advance to face the Yankees in the ALCS. Their highly talented pitching staff and hard hitting line up should take care of business and probably winning and advancing after game 4. The starting pitchers for that game will be the Cy Young candidate, Justin Verlander, for the Astros and the Rays are going with Diego Castillo.

The New York Yankees defeated the Minnesota Twins in 3 games in the American League Divisional Series. The Yankees explosive offensive attack at the plate proved to be way too much for the Minnesota Twins to handle. The Yankees await the winner of the series between Tampa Bay Rays and the Houston Astros to play in the American League Championship Series beginning on Saturday, October 12, 2019. The time of this game is to be determined as of now.