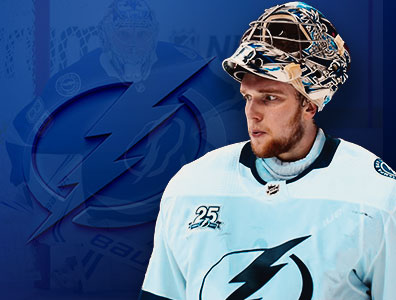 On Monday, July 29th, 2019 the Tampa Bay Lightning signed superstar goalie, Andrei Vasilevskiy, to a long-term contract extension. According to sources, the deal is an 8-year agreement for $76 million.

This upcoming 2019-2020 NHL season will be the last year of Vasilevskiy’s previous contract that he signed in 2016. During this last year of his old contract he will earn $3.5 million with the Lightning.

This contract extension will retain the services of Andrei Vasilevskiy through the 2027-2028 NHL season unless Tampa Bay decides to trade or release their All Star goaltender. On average, Vasilevskiy will make $9.5 million per year over the course of this new contract extension. This puts him third on the list of highest paid goalies behind Montreal Canadians Carey Price who averages $10.5 million per year, and Florida Panthers, Sergei Bobrovsky, who earns $10 million per season.

Despite breaking his foot resulting in him missing 14 games for the Tampa Bay Lightning, Vasilevskiy still let the National Hockey League in wins with 39. He recorded his career best in save percentage with .925 and goals against average with 2.40 throughout the 53 games that he played in. These numbers definitely assisted Vasilevskiy in being awarded the Vezina Trophy for being the best goaltender in the NHL over the course of the 2018 – 2019 hockey season.

"I'm very excited to sign this extension with the Lightning today," says Vasilevskiy. "I'd like to thank the entire organization, including Mr. Vinik, Julien BriseBois and the great Bolts fans, for making this such a great place to play and live for me and my family."

"The Lightning are very proud to extend Andrei for another eight years today," explained Julien BriseBois, who is the vice president and general manager of the Tampa Bay Lightning. "Since joining the organization Andrei has shown unmatched work ethic and professionalism both on and off the ice. We look forward to him continuing his career in Tampa Bay for the foreseeable future."