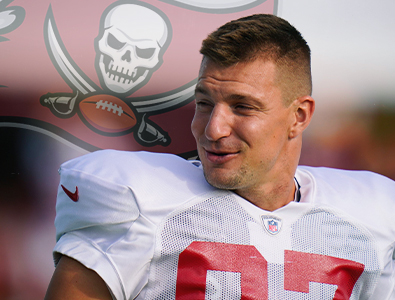 On Wednesday, September 22nd, 2021 the Tampa Bay Buccaneers and former New England Patriots veteran superstar play – making tight end, Rob Gronkowski, decided to clear the air after an interview, and he wants the sports media world to understand that he does work hard and prepare for each and every professional football game that he plays in the National Football League. Gronk’s original comments that led to accusations of Rob not taking pro football game preparations seriously recently aired on Eli and Peyton Manning’s dumb – ass ESPN Monday Night Football Mega - Cast that is nationally broadcasted.

Those two stooges in the Manning brothers tried to encourage Gronkowski to divulge information leading to the public believing that he does not watch very much film, practice very hard especially late in the week, and prepare with a strong mental attitude before his upcoming NFL games. Peyton and Eli Manning are about as funny as Larry the Cable Guy or any other southern redneck idiot wanna be comedian.

After much backlash Gronkowski was forced to go out there and clear the air by refuting those bogus misconceptions that the sports world may have falsely believed. If you really do know Rob Gronkowski you would know that he spends a lot of time working hard practicing as well as a lot time recovering the trainer’s room for upcoming brutal NFL match – ups that he and his team take extremely seriously.

In fact, look at Tom Brady as much as he makes the pro football game look easy, he would be the first person to tell you that this shit does not come easy. Brady spends countless hours preparing, and his football regiment is designed to make him be able to perform at the highest level even at his ripe age of 44 – years – old. That’s the New England Patriots way.

Look for both Brady and Gronk to continue to work hard, have fun, and advance to the NFL playoffs. As much as pretty much the entire country is sick of seeing these two dominate the National Football League especially in the NFL postseason it definitely does not seem like the Tampa Bay Buccaneers are even close to done their reign of rest of the league. I think the Tampa Bay Buccaneers will get as far as the NFC championship game this year, but you never know they might even repeat as Super Bowl champions as hard as that is to do in today’s NFL.

"I actually watch tons of film. An overload of film. I will probably blame [Bucs vice president of communications] Nelson [Luis] over there. He asked me eight times to go on the show. I told him, 'It's not a good idea.' They always get me in that type of silly atmosphere, and that's what happened," says the Tampa Bay Buccaneers starting veteran tight end with a strong sense of humor, Rob Gronkowski. "Now Coach [Bruce Arians] threatened me. I don't get my vet day anymore."

Gronkowski continued to joke around on that show by saying, "I just run by guys, and if I'm feelin' good, I'm feelin' good. ... I actually do go up to Tom [Brady] 'cause Tom watches like, I don't know, 40 hours of film a week. I go, 'Tom, who's covering me this week? What type of coverages are they doing?' I go, 'That's why I love playing for you, dawg. You just know everything.'"

Gronkowski also fucked around by stated that, “He doesn't practice on Fridays because it's red zone day and he doesn't need to because he's ‘Red Zone Robby G already, baby!’”

"Trust me, I watch so much film that my girlfriend gets mad at me. She friggin' throws shit at me sometimes, I'm watching so much film," Gronkowski explained sarcastically. "Sometimes I go home and she's like, 'You've been gone all day and now you're studying, you've got your iPad out,' and I'm like, 'Yeah, I've gotta get into it. I gotta learn.'"

"It never feels, like, totally easy," Gronk expressed. "It really never does. Even when it looks easy, it just doesn't really like, 'Oh, man, that was easy.' It's just really not because there's just so much work that goes into it. But I would say that just the way we've been practicing and just being on the same page, we've just gotta [continue] to build that or else teams are gonna stop you."

Over the course of his long NFL career as well as Gronkowski’s NCAA college football career he has accomplished the following achievements, honors, and awards: