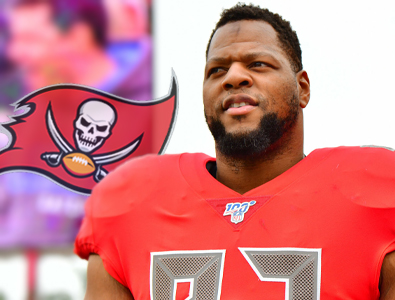 Last month the Tampa Bay Buccaneers and their veteran star defensive lineman, Kdamukong Suh, have come to an agreement on the terms of a new contract. This deal is just for one year, and it is worth up to $8 million. The entire contract is fully guaranteed total money and it includes a $5 million signing bonus.

This new contract is very similar to his one year $9,250,000 deal he signed with the Tampa Bay Buccaneers prior to the 2019 – 2020 NFL season. He took a little less money this year, but he will be playing on a much improved team. The Bucs have done an excellent job of making moves and signing players over this offseason of the National Football League.

In March of 2020 the Tampa Bay Buccaneers resigned TE Tanner Hudson, OLB Jason Pierre-Paul, WR Bryant Mitchell, TE Antony Auclair, LB Kevin Minter, S Andrew Adams, DL Rakeem Nunez-Roches, CB Ryan Smith, and of course DL Ndamukong Suh. They went out into the NFL’s free agency market and signed T Joe Haeg as well as the all time great QB Tom Brady. The Buccaneers also placed the non - exclusive franchise tag on their outside linebacker Shaquil Barrett too. All of these key moves will help keep the Buccaneers team together as well as greatly improve it from last season. 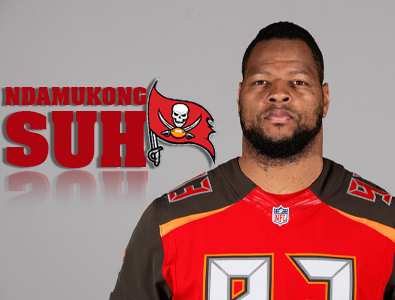 "I wanted the entire defense, if we could, to stay together," says the Tampa Bay Buccaneers head coach Bruce Arians. "They played so well together. Each piece of the puzzle knew each other. Suh was a big, big part of it. Not as much in the sack game as much as his interior pressure and the great job he did last year against the run. I mean, we were No. 1 against the run in the league last year, and a lot of it was because of him and Vita [Vea]."

ESPN’s Adam Schefter tweeted, “Soon-to-be Buccaneers’ DT Ndamukong Suh was interested in playing for Tampa’s new defensive coordinator Todd Bowles. Plus, no state tax in Florida, making a deal there more attractive. So Suh expected to wind up back in Florida, as a Buc, his third team in the past three seasons.”

Last October, the Los Angeles Rams head coach Sean McVay stated, "Yeah, I think he's been a little bit more. I've always had a lot of respect for his game, but I think his ability to really play across the line, really, at any interior spot. He can play off the edge and he's made a lot of plays, really, at all those spots. So, continue to come away impressed with him."

Ryan Kartje posted, “Les Snead said that they’re “projecting” that Ndamukong Suh will be out of their price range.”

Luke Easterling writes, “Bringing Suh back completes one of Tampa Bay's most important missions for this offseason, as they keep one of the NFL's best front-seven groups in tact. The entire defense made huge improvements over the second half of last season, and Suh was a big part of the league's top-ranked rushing defense. His veteran presence in the locker room can't be overstated, either, especially with the defense relying on so many young players. Defensive coordinator Todd Bowles will have the band back together in 2020, and Suh will be a key part of building on last year's success.”

“The No. 1 goal for me coming out of last season was to continue to build on defense. The only way to build is to keep everyone in place and grow. It’s huge,” says Bucs head coach Bruce Arians.

“They’ll be so far ahead of our offense, if and when we get back out on the field. I think our offense will catch up pretty fast,” Arians explained. “We did some really nice things last year and we got better and better, especially those last six weeks of the season.”

“I wanted the entire defense, if we could, to stay together. They played so well together; each piece of the puzzle knew each other,” Arians goes on to say. “Suh was a big, big part of it obviously – not as much in the sack game as much as his interior pressure and the great job he did against the run.”