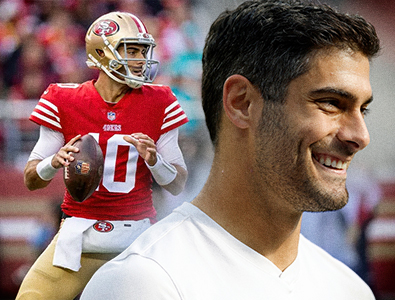 On Sunday, December 4th, 2022 the San Francisco 49ers realized that their veteran starting quarterback, Jimmy Garoppolo, broke his ankle, and he will have to miss the remainder of the 2022 - 2023 NFL season as this injury will require surgery in order to repair the damage done during the San Francisco 49ers win over the Miami Dolphins last Sunday afternoon.

For an astonishing 2nd - time during the 2022 - 2023 NFL regular - season, the San Francisco 49ers will have to play without their starting quarterback due to a season - ending injury. This time, it was a broken left foot for Garoppolo, who has already been through what seems like a career's worth of injuries so far throughout his NFL career, and unfortunately for the San Francisco 49ers, Jimmy was having one of his very best stretches of quarterback play as a professional in the National Football League.

"I saw him at halftime and I was pretty emotional," the San Francisco 49ers superstar defensive end, Nick Bosa, expressed. "It sucks. Kind of similar to how I was feeling in 2020 [when I suffered a season - ending ACL injury]. I couldn't get it off of my mind. I just kind of had to force myself to block it out and keep going."

Replacing Garoppolo at QB for the San Francisco 49ers

The San Francisco 49ers’ rookie quarterback, Brock Purdy, had to replace Garoppolo last Sunday, and Brock threw for his very 1st - NFL touchdown pass during his first drive after being thrown into game action last weekend as he found fullback Kyle Juszczyk for a 4 - yard touchdown score. Purdy finished the game going 25 - of - 37 which was good for 210 - passing yards as well as 2 - touchdowns and just 1 - interception. Purdy earned a much - deserved passer rating of 88.8 while filling in for Garoppolo last Sunday afternoon.

Shanahan also mentioned that Garoppolo, "broke a few things," in his left foot, and Jimmy will now need a season - ending surgical procedure in order to repair his left foot injury. This marks the 3rd - time since the 2018 - 2019 NFL season that Garoppolo will finish the year on the NFL’s injured reserve list.

This most recent injury for Garoppolo occurred only 8 - plays into the San Francisco 49ers' opening drive during their 33 to 17 victory last weekend. With just 11 - minutes and 22 - seconds remaining in the 1st - quarter of play from Levi’s Stadium located in Santa Clara, CA, the Miami Dolphins linebacker, Jerome Baker, as well as the Miami Dolphins defensive end, Jaelan Phillips, came together to put a nasty leg dragging sack on Garoppolo which inevitably ended his season.

Jimmy made an attempt to keep his body’s momentum moving in a forward direction, but his left foot was trapped underneath Jaelan Phillips while he was taken down to the turf last Sunday. Garoppolo got up to slowly hobble over to the San Francisco 49ers sideline, and Jimmy ultimately had to make his way into the dreaded blue medical tent prior to being carted off of the field into the San Francisco 49ers’ locker room for a more thorough medical evaluation.

Garoppolo was initially said to be questionable to return to game action, but Jimmy was eventually and officially ruled out of the contest for the San Francisco 49ers with 8:39 remaining in the 2nd - quarter of the game versus the Miami Dolphins.

"Just hearing it, it's pretty crushing," the head coach of the San Francisco 49ers, Kyle Shanahan, stated. "You know what Jimmy has been through, how hard he's worked at this."

Garoppolo’s broken foot marks the 2nd - foot / ankle injury to a San Francisco 49ers’ starting quarterback this year. Lance sustained a right fibula fracture back on September 18th, 2022 during the San Francisco 49ers victory vs. the Seattle Seahawks which resulted in Trey being placed on NFL’s injured reserve list. 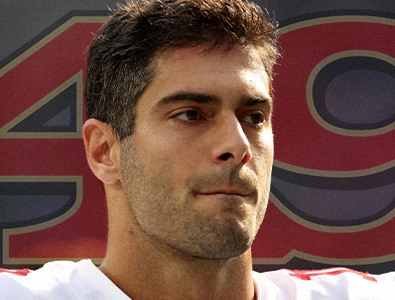 Garoppolo has managed to start every single regular - season game ever since Lance's latest injury, as the 49ers went 7 and 3 during his 10 - starts this year. This is just the latest injury in a very lengthy list of injuries for Jimmy Garoppolo since his arrival in San Francisco way back in 2017. Garoppolo previously tore his left ACL back in 2018, had a pair of high right ankle sprains in 2020, and he also had to manage a fractured right thumb as well as a sprained right shoulder last year during the 2021 - 2022 NFL season.

This latest injury seems to have come at a particularly bad time, provided how particularly well Garoppolo was playing throughout this 2022 - 2023 NFL regular - season up until now. In Jimmy’s 11 - appearances prior to his broken foot injury, Garoppolo had passed for 2,437 - yards as well as 16 - touchdowns with only 4 - interceptions while he was able to complete 67.2 % of his total pass attempts.

"That was brutal," the San Francisco 49ers running back, Christian McCaffrey, proclaimed. "I haven't been around a long time here, but I can't say enough good things about him. ... When you see a guy like Brock come in and did well like that, it's because of Jimmy. It's because of learning from a guy like Jimmy. ... Heartbreaking."

Currently the San Francisco 49ers are sitting pretty with their overall record of 8 and 4 as they are riding a 5 - game winning streak, the 49ers will now have to turn to their rookie third - string quarterback, Brock Purdy, in order to keep them rolling hard and with a full head of steam towards to the 2022 - 2023 NFL postseason. Purdy's main objective will be to protect the football as well as to distribute the ball primarily to the San Francisco 49ers long list of deadly offensive weapons.

Past history would indicate that Purdy will have an uphill climb. Since Kyle Shanahan took the San Francisco 49ers over back in 2017, the Niners have compiled an overall record of 42 and 19 in games started by Garoppolo, and that record includes the NFL playoffs, but the San Francisco 49ers are 9 and 29 when other quarterbacks such as Trey Lance, Nick Mullens, C. J. Beathard, and Brian Hoyer have started the game.

Purdy, who was named "Mr. Irrelevant" as he was picked as the last selection of the 2022 NFL Draft, as the 49ers used the 262nd and final pick of the 2022 NFL Draft on Brock, apparently has plenty of relevance now. Prior to last Sunday afternoon, Purdy appeared only during mop - up duty in the course of 3 - games, going 4 - of - 9 which was good for 66 - passing yards and 1 - interception vs. the Kansas City Chiefs back on October 23rd, 2022.

Now next week, when the San Francisco 49ers face off against the Tampa Bay Buccaneers, Purdy will become the first "Mr. Irrelevant" to start an NFL regular season game in the common draft era, and he will do so against the G. O. A. T. in Tom Brady, who has compiled an overall record of 7 and 0 throughout his illustrious and long NFL career vs. quarterbacks making their 1st - NFL start.

"I think it's cool," the San Francisco 49ers quarterback, Brock Purdy, explained. "He's been playing football longer than I've been alive, so to have a first start against, you know, the GOAT, it's gonna be pretty cool."