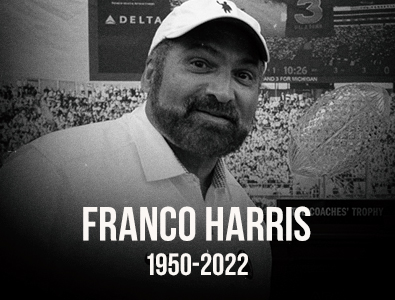 On Wednesday, December 21st, 2022 the legendary, historic, and Hall of Fame Pittsburgh Steelers running back, Franco Harris, passed away at the age of 72.

Harris’ heads - up thinking on the gridiron enabled him to author the "Immaculate Reception," and that play is still to this day considered one of the most iconic plays in the history of the National Football League.

Franco’s son, Dok, told reporters at The Associated Press that his father passed away just overnight, but no other details including the cause of death were not provided to the major sports media outlets once this news story broke.

Turning the Pittsburgh Steelers into a Dynasty in the 1970’s

With the Pittsburgh Steelers down 7 to 6 and an upcoming fourth - and - 10 from their own 40 - yard line approaching with just 22 - seconds left in regulation, Bradshaw floated back and tossed the ball deep to their running back French Fuqua. Fuqua and the Oakland Raiders defensive back Jack Tatum met in a collision that sent the ball flying back towards the midfield in the immediate direction of Harris.

While almost everyone else on the playing field managed to freeze up and stop in that moment, Franco kept his legs moving as he scooped up the football a matter of only inches above the Three Rivers Stadium field turf close to the Oakland Raiders 45 - yard - line followed by Harris outracing multiple shocked Oakland Raiders defensive players in order to give the Pittsburgh Steelers their very 1st - playoff win throughout their franchise's 4 - decade - long history.

"That play really represents our teams of the '70s," Harris recalled following the Immaculate Reception was voted as the greatest play in the history of the National Football League during the NFL's 100th anniversary season back in 2020.

The 6 - foot - 2 and 230 - pound powerhouse of a running back out of Penn State, found himself in the middle of everything. Harris wheeled for a then - NFL record of 158 - rushing yards as well as 1 - touchdown during the Pittsburgh Steelers 16 to 6 win against the Minnesota Vikings in Super Bowl IX earning him the honor of being named that game's Most Valuable Player. Franco scored at least once in 3 of the 4 Super Bowls in which he appeared in, and his 354 - career rushing yards on the NFL's biggest stage of the Super Bowl still stands as an NFL record approximately 4 - decades after Harris retired from playing in the National Football League. 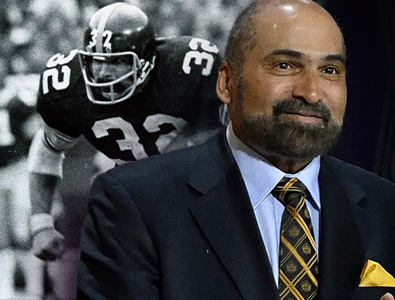 Franco was born in Fort Dix, New Jersey, on March 7th, 1950, and Harris played his college football career at Penn State University, where his main objective was to use his size and strength to open up holes for his teammate, Lydell Mitchell. While the Pittsburgh Steelers were in the last stages of their rebuild that was managed by their Hall of Fame head coach in Chuck Noll, saw enough in Harris to make him the 13th - overall pick in the 1st - round of 1972 NFL Draft.

Harris' impact on the field for the Pittsburgh Steelers showed up immediately. Franco managed to win the National Football League's Rookie of the Year Award way back in 1972 when that season Harris rushed for a then - franchise - rookie record of 1,055 - rushing yards and 10 - touchdowns as the Pittsburgh Steelers made the NFL playoffs for just the 2nd - time in their NFL franchise history.

The Immaculate Reception produced a star football player in Franco, although Harris generally desired to let his play on the football field and not his mouth do the talking for him. He was also blessed to play with such a talented n a team that featured bigger than life personalities with other Pittsburgh Steeler greats like their quarterback Bradshaw, their defensive tackle Joe Greene, linebacker Jack Lambert as well as others.

A total of 8 - times Franco rushed for over 1,000 - yards in a single season during his NFL career with the Pittsburgh Steelers, that includes 5 - times when the league was only featuring a 14 - game regular season NFL schedule. Harris compiled another 1,556 - rushing yards as well as 16 - rushing touchdowns during the NFL playoff games that he showed up for which is good for the 2nd - all - time NFL record behind only the great Emmitt Smith.

"You see, during that era, each player brought their own little piece with them to make that wonderful decade happen," Harris explained in his Hall of Fame speech back in 1990. "Each player had their strengths and weaknesses, each their own thinking, each their own method, just each, each had their own. But then it was amazing, it all came together, and it stayed together to forge the greatest team of all times."

Harris also made his rough and tough reputation by making a habit of sticking up for his teammates. One time when Terry Bradshaw took an illegal late hit according to Franco by the Dallas Cowboys star linebacker, Thomas "Hollywood" Henderson, during the 2nd - half of the Pittsburgh Steelers meeting with the Dallas Cowboys in the 1978 Super Bowl.

Then Franco essentially commanded that Bradshaw hand the ball of to him on the very next play, and Harris managed to sprint hard up the middle for a 22 - yard gain right past Henderson as Franco found the endzone for a spectacular touchdown on that carry that gave the Pittsburgh Steelers an 11 - point lead in that game in which the Pittsburgh Steelers would hold on to in order for them to win their 3rd - Super Bowl championship in the short span of just 6 - NFL seasons.

Harris went on to sign with the Seattle Seahawks after that as he ran for only 170 - rushing yards over the course of a total of 8 - NFL games prior to the Seattle Seahawks then cutting him during the midseason that year. When Harris ultimately retired from playing professional football, he was the National Football League's 3rd - leading career rusher behind only the late great Walter Payton of the Chicago Bears and Jim Brown of the Cleveland Browns.

Franco Harris is survived by his wife, Dana Dokmanovich, as well as his beloved son, Dok. He will be greatly missed, but Harris left such a large impact on so many.