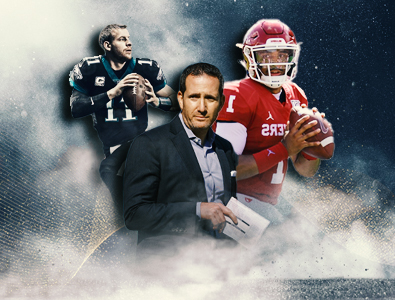 The 2020 NFL draft was held from Thursday, April 23rd, 2020 through Saturday, April 25th, 2020. Due to the coronavirus pandemic the draft was executed through the internet. The coaches, the owners, and the other executives were shown selecting players from the comfort of their homes during the stay at home or shelter in place orders that are currently in place.

On Friday, April 24th, 2020 the Philadelphia Eagles selected the quarterback out of the University of Oklahoma in Jalen Hurts. He was taken in the second round of the draft with the 53rd overall pick in the 2020 NFL draft. The Oklahoma Sooners have had three consecutive years with a quarterback selected in the first or second round of the NFL draft. Hurts joins Baker Mayfield and Kyler Murray in that group of Oklahoma quarterbacks.

The Importance of a Back Up Quarterback

Wentz had an amazing 2017 – 2018 season in the National Football League, but he was injured prior to the NFL postseason. The Philadelphia Eagles relied on the services of their back up quarterback at that time, Nick Foles, to lead them to winning Super Bowl LII. Wentz has had a serious history of injuries that have sidelined him from playing over his four year career in the National Football League.

The rookie quarterback from the University of Oklahoma also played at the University of Alabama before he transferred. Hurts can move the football by throwing it and by running the ball. The Philadelphia Eagles can use him as a utility player similar to how the New Orleans Saints use Taysom Hill. It was a wise decision by the Eagles to draft him and develop him. They can even use him in a trade if they need to make a big move to improve their team at another position. 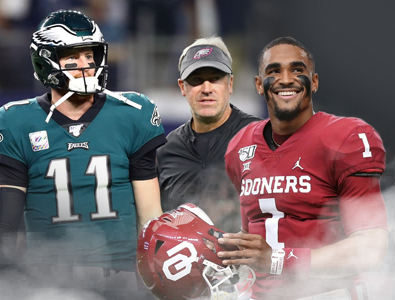 The Philadelphia Eagles general manager, Roseman, explained the choice to draft Hurts was, "Independent of" Carson Wentz, Roseman goes on to say, "There's no threat to Carson here."

"We have shown how we feel about Carson by our actions, by the amount of picks we put into him, and we showed it by the contract extension," Roseman stated. "We believe this is the guy to lead us to our next Super Bowl championship. But for better or worse, we are QB developers.

"When we make these kind of decisions, we always go to our principles and who we are and what we believe in, and right or wrong, this is who we are."

Roseman let Wentz know in advance that they may draft Hurts earlier on Friday, April 24th, 2020. He expressed that this move is, "exciting for our quarterback. This is exciting for our football team. And these are the kind of decisions we are going to make, and we're proud of it."

"We think Carson is a phenomenal player, and nobody is going to be looking at a rookie quarterback as somebody who is going to be taking over for a Pro Bowl quarterback, a guy who has been on the cusp of winning an MVP," says Roseman.

"He has a unique skill set," the Philadelphia Eagles head coach Doug Pederson expressed. "You see what Taysom Hill has done in New Orleans and how he and Drew Brees have a connection there and a bond there. And you look at [Joe] Flacco and Lamar [Jackson] in Baltimore for the short period of time, how they jelled together. It's just something we're going to explore."

"He's part of the new guard of the mobile quarterbacks in the league that can win throwing it or running it. Just an uncanny toughness, poise and competitiveness," the Philadelphia Eagles vice president of player personnel, Andy Weidl, stated. "A leader."