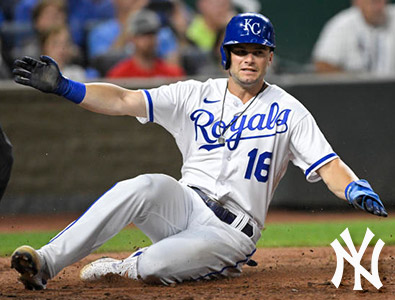 In exchange for the 28 - year - old Benintendi, the three New York Yankees’ minor league pitching prospects that are being sent over to Kansas City to now play ball for the Royals include the right - hander Beck Way, the right - hander Chandler Champlain, as well as the left - hander T. J. Sikkema.

The left - handed hitter and outfielder, Benintendi, was named to his first career MLB All - Star Game this season for his outstanding and dependable performance throughout the first half of the 2022 season of Major League Baseball. Including Andrew’s work through Wednesday, July 27th, 2022 he's hitting an all - time career - high with his batting average right at .320 to go along with his 3 - home runs, OPS of .788, and 39 - RBIs throughout the 93 MLB regular season ball games so far this year.

Andrew is eligible and scheduled to enter the MLB free agency market following the current 2022 MLB season. Benintendi provides the New York Yankees another great outfield option with a lefty bat next to both of his new teammates in Aaron Judge as well as Aaron Hicks.

Giancarlo Stanton, who has previously played 38 - games in the outfield so far during this maturing 2022 MLB season. The 2022 MLB All - Star Game MVP in Stanton is now predicted and anticipated to have to miss at least 2 - weeks and possibly 3 - weeks following Giancarlo being placed on the injured list earlier this week with a serious case of left Achilles tendinitis. Joey Gallo is carrying a heavily - struggling batting average of .161 to go along with Gallo’s incredibly high 103 - strikeouts over the course of his 230 official MLB at - bats that has inevitably led him to get booed hard at Yankee Stadium by his home crowd.

The New York Yankees has also filled that third outfield spot by increasingly using the 36 - year - old gritty veteran in Matt Carpenter. Carpenter has not played out in the outfield ever since way back in 2014.

Not a Prototypical Midseason Trade

Benintendi's .320 batting average is the third highest (minimum 300 plate appearances) at the time of a midseason trade to the New York Yankees while the others are listed below:

"Benintendi is a great hitter," The New York Yankees manager, Aaron Boone, explained to the sports media outlets following the Yankees’ Wednesday night's 3 to 2 defeat to the New York Mets from Citi Field in Queens, New York but this was before the trade was officially announced to the public yet. "Gets on base at a really high clip. Hits from the left side so, yeah, gives you some balance."

The 2021 MLB Season for Andrew Benintendi

Last season while playing for the Kansas City Royals, Andrew compiled a solid batting average of .276 to go along with Benintendi’s 17 - home runs and 73 - RBIs, and he managed to earn a Gold Glove in his very 1st - MLB season with the Kansas City Royals. Andrew was originally picked up by Kansas City Royals from the Boston Red Sox back in February of 2021 as cog in a 3 - team complicated Major League Baseball trade that the New York Mets were also a part of.

"He's a really good player," the New York Yankees superstar slugging outfielder Aaron Judge explained. "I had a chance to play against him for quite a few years when he was playing over in Boston, and I've seen him do a lot of impressive things. ... He'll be definitely a big piece of what we got going on here."

Judge goes on to say, "I think adding a guy like that would definitely give us a little bump up, that's for sure. And I think he's gonna fit right in." 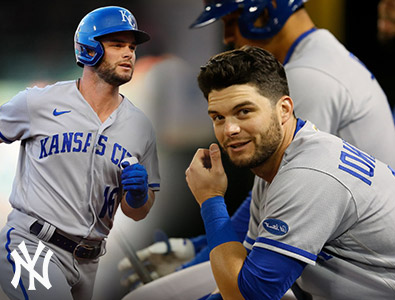 Throughout Benintendi’s 30 - MLB career games that he has played at Yankee Stadium mostly with the Boston Red Sox, Andrew has recorded a batting average of .261, with 7 - home runs, and 20 - RBIs. Benintendi managed to finish 2nd to Judge in the 2017 American League Rookie of the Year Award voting, but he did go on to win an MLB World Series championship title with the Boston Red Sox the very next baseball season.

Andrew was just 1 of the 10 - ball players on the Kansas City Royals who were unable travel to Toronto during mid - July of 2022 to play a 4 - game series versus the Toronto Blue Jays due to the fact they all had not received the COVID - 19 virus vaccination, and Benintendi also lost $186,813 of his $8.5 million salary he won in an arbitration case against the Kansas City Royals.

"For me, it was a personal decision," Benintendi previously stated regarding his choice not to get vaccinated against the COIVD - 19 virus. "And I'm going to leave it at that."

Champlain is 23 - years - old, and Chandler was a 9th - round MLB draft pick last year. He was 2 and 5 with an ERA of 4.30 throughout his 15 - starting pitching assignments as well as 1 - relief pitching appearance at Class - A in Tampa, Florida.