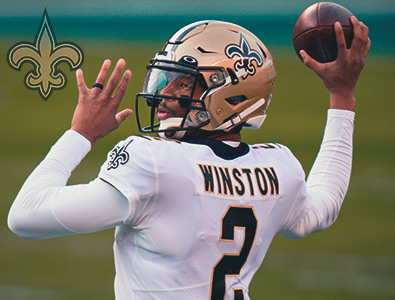 The Dallas Cowboys are on the road for the first week of the 2021 – 2022 NFL season, there are no scheduled events at this stadium for Sunday, September 12th, 2021, and the New Orleans Saints have been operating out of the Dallas / Fort Worth area since they evacuated New Orleans, Louisiana last week. At the moment power has yet to be restored in New Orleans, and the Saints are prepared to play away from their home location probably for the entire month of September this year.

Winston was born and raised in Bessemer, Alabama. He attended Hueytown High School located in Hueytown, AL where he excelled at both football as well as baseball. Jameis committed to Florida State University to play his NCAA college athletics for the Seminoles. He was draft by the Texas Rangers in the 15th – round of the 2012 MLB Draft, but Winston decided not to sign with the Texas Rangers even though they proposed allowing Jameis to play football for the Florida State Seminoles while also working out with the Texas Rangers’ baseball organization.

After Jameis dominated both the NCAA college football and baseball landscapes from 2012 to 2014 Winston was selected by the Tampa Bay Buccaneers with the number 1 overall pick in the first - round of the 2015 NFL Draft. Jameis was the starting quarterback for the Tampa Bay Buccaneers for the majority of his time with their NFL franchise from the 2015 – 2016 NFL season to the 2019 – 2020 NFL season. 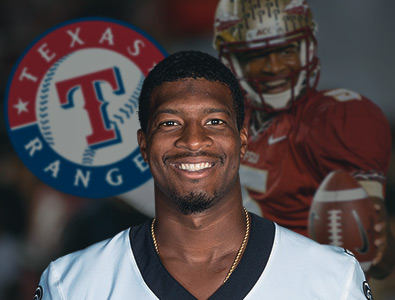 Throughout his up and down NFL career Winston has been very inconsistent. He has often been at the top of the league in passing yards and touchdown passes, but Jameis has also been at the top of the league in interceptions and overall turnovers. This high risk – high reward style of play at the quarterback position in the National Football League will often not be tolerated, and the Tampa Bay Bucs decided to move on from Winston prior to the 2020 – 2021 NFL season in which Tom Brady led the Tampa Bay Buccaneers to a Super Bowl championship.

The New Orleans Saints signed Jameis to a 1 – year contract for both the 2020 – 2021 NFL season as well as the upcoming 2021 – 2022 NFL season. This will be Winston’s second chance at leading an NFL team as their starting quarterback, and it may be his last chance to do so.

This year with the New Orleans Saints, Jameis will be expected to put up the big offensive numbers that he is used to accustomed to recording, but he will also be expected to dramatically cut down the number of interceptions and overall turnovers that have plagued his 6 – year NFL career so far. Taysom Hill will be used as an overall utility player and back – up quarterback for the New Orleans Saints this season. Hill can fill in and make plays at multiple offensive positions including quarterback, running back, wide receiver, and tight end. If Winston fails to succeed or gets injured as the New Orleans Saints’ starting quarterback, Hill will easily be able to fill in at QB and run the Saints’ first – team offensive unit.

"I would love to carry that torch from him," the New Orleans Saints’ newly appointed starting quarterback, Jameis Winston, expressed to the sports media world earlier this week when asked about the retirement of the New Orleans Saints beloved Hall of Fame quarterback in Drew Brees. "I would love to be able to provide the excitement and joy and resilience that he provided for this city. I was just thankful. These opportunities don't come too often. A whole year of not starting a football game. That's what I said in our team prayer, like, 'Lord, thank you for this opportunity.' ... He's the one that did it, the lord did it for me. And I missed it man. I missed going out there and leading the pack. That's fun, that's fun stuff."