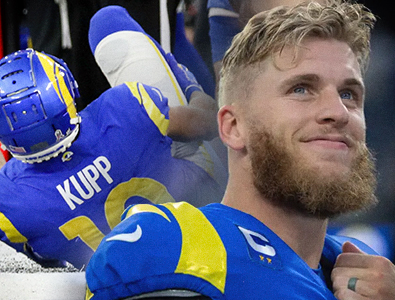 There is no immediate time table on how long Kupp will have to be sidelined with this injury for the Los Angeles Rams as of now. After last weekend’s game, the head coach of the Los Angeles Rams, Sean McVay, explained that Kupp’s injury, "Didn't look good and didn't sound good."

The Los Angeles Rams’ WR Cooper Kupp was forced to leave the Rams week - 10 loss during the 4th - quarter following Kupp injuring his right ankle in an attempt to pull down a pass from his quarterback, John Wolford. Cooper seemed to grab and favor his right leg, more specifically the lower portion of his right leg (high - ankle), right after that play, and Kupp needed to be helped off of the field to the Los Angeles Rams’ bench by his team's physicians and medical staff.

Prior to entering that game against the Arizona Cardinals, Cooper had accounted for approximately 35.7 % of the Los Angeles Rams' pass receptions so for this 2022 - 2023 NFL season, which is the highest percentage by any football player in the entire National Football League thus far this year.

The highly - talented wide receiver out of Eastern Washington University completed last week’s contest with 3 - receptions which were good for his career - lowest minus - 1 yard(s). Cooper Kupp started last Sunday’s match - up with a total of 72 - receptions, which was on pace for 153 - yards over this year’s 17 - game NFL regular season.

The National Football League’s single - season record of 149 - yards per game was previously set by the New Orleans Saints' wide receiver, Michael Thomas, back during the 2019 - 2020 NFL season when Thomas exploded all over the NFL prior to his last few seasons which were plagued by injuries and underperformance.

This is terrible news for the already struggling defending Super Bowl champion Los Angeles Rams. If things were not already bad enough for the Los Angeles Rams this year, then knowing that their very best and their absolutely most reliable wide receiver in Kupp will be missing some significant time with this latest injury can be looked at as nothing but a devastating diagnosis.

The L. A. Rams better start recovering sometime soon as in now if they have any inclination of making the 2022 - 2023 NFL playoffs this season. If I were you, I would stay away from even any prop bets involving the Los Angeles Rams until they show some more stability on the offensive side of the ball unless they are facing a very insignificant opponent such as the New Orleans Saints, Pittsburgh Steelers, Houston Texans, Chicago Bears or some other bottom of the barrel NFL franchise these days. Gambling on the Rams in ill - advised at the moment unless you know something that I don’t.