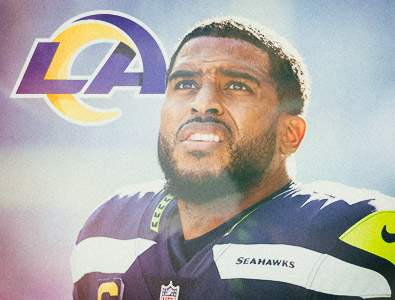 On Thursday, March 31st, 2022 the defending Super Bowl champion Los Angeles Rams announced that they are signing the 6 – time NFL All – Pro linebacker, Bobby Wagner, to a 5 – year contract worth up to approximately $50 million. If Bobby can hit all of his incentives, then he can possibly earn $65 million over the course of his new deal with the Los Angeles Rams.

Up until just now Wagner has played his entire 10 – year career in the National Football League with the Seattle Seahawks where he was selected to 8 – NFL Pro Bowls and won Super Bowl XLVIII against the Denver Broncos. The move to Los Angeles in order to join the Rams is a kind of homecoming for Bobby as he was born in Los Angeles, California.

At the moment the Los Angeles Rams mostly run a base 3 – 4 defense. Their defensive line consists of players such as A’Shawn Robinson (LDE), Greg Gaines (NT), and the former 3 – time NFL Defensive Player of the Year Award recipient in Aaron Donald (RDE).

It was important for the Los Angeles Rams to sign Wagner for the upcoming 2022 – 2023 NFL season after losing the great linebacker in Von Miller to free agency. Miller recently signed a 6 – year contract with the Buffalo Bills worth up to approximately $120 million.

Wagner has been one of the best inside linebackers in the National Football League over the course of the last decade, and Bobby should definitely help the Los Angeles Rams compete for another Super Bowl this season.