On Monday, June 6th, 2022 the Los Angeles Rams restructured the contract of their NFL All - Pro superstar veteran defensive tackle, Aaron Donald. Due to Donald’s reworked contract Aaron got a huge raise, and he has now become the highest paid non - quarterback in the entire National Football League.

The Details of the New Contract

The Los Angeles Rams reconstructed Aaron’s agreement in order to give him a $40 million raise over the last 3 - years of his current existing contract, which now makes him the first non - quarterback to surpass the $30 million per year mark. The new deal creates the total value of Aaron's contract to $95 million throughout 3 - years.

"It's a big deal," the Los Angeles Rams head coach Sean McVay explained. "And he's earned it. And he truly is one of one in my opinion. Means so much to me, to our organization. I think the respect that he's garnered around this league from guys that have done it at such a high level. What he's accomplished through his eight years is unparalleled. So [we] wanted to be able to find a solution to getting him taken care of, having him continue to lead the way for our team, for our defense. We had a feeling it was trending in the right direction when he was at my wedding on Saturday night."

The new contract that was negotiated by Donald’s agent, Todd France, absolutely included a $65 million in total guaranteed money over the 1st - 2 years of the lifecycle of the contract, and it is reworked in such a manner that Donald can either retire from playing professional football in the NFL or return for the 2024 - 2025 NFL season for the additional cost of $30 million in guaranteed total cash if he so chooses to do so.

The new restructured agreement includes a steady a no - trade clause. The 31 - year - old, Aaron - D, underwent his physical examination and he signed the contract on Monday, June 6th, 2022. The Los Angeles Rams began their non - voluntary minicamp on Tuesday, June 7th, 2022.

The Los Angeles Rams star tweeted a video from Aaron Donald last Monday where he stated: "What's up, it's Aaron Donald, I'm locked back in. Let's go get us another ring. Why not? At SoFi Stadium, getting chills thinking about it. Let's go to work."

Donald had indicated on the "I Am Athlete" podcast last week that his return for the 2022 – 2023 NFL season was dependent upon getting a new contract, and that he would be "at peace" with his completed career in the National Football League if a deal could not be reached in time.

McVay recognized the "business side" to Donald's remarks, but he mentioned, "This was something that you felt good about.

"The things that you see day in and day out -- the way that he works, the consistency at which he works, how he affects and influences the rest of our team and really even me as a coach and the rest of our coaching staff, everything -- you're checking all the boxes for what you want for a Ram. 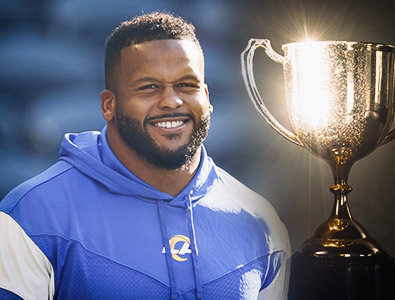 McVay also gave credit to the team owner of the Los Angeles Rams in Stan Kroenke for making sure the new contract with Donald got finalized.

"Mr. Kroenke knows how important it is to really be able to take care of your foundational guys that have done an outstanding job," McVay goes on to say. "It's a big deal."

The 3 - time Defensive Player of the Year Award winner in Aaron Donald cemented the Los Angeles Rams' championship victory over the Cincinnati Bengals during Super Bowl LVI when he pressured the quarterback of the Cincinnati Bengals, Joe Burrow, into a poor throw on 4th - down late during the 4th – quarter of that last Super Bowl.

Over the course of his 8 - seasons playing football in the National Football League, Aaron has 98 - sacks. Donald has 6 - seasons with at least 10 – sacks, the 2nd - most by a primary interior lineman, since sacks became an official stat back in 1982, trailing only John Randle, who had 9 – seasons with that many sacks.

Donald has been selected to the NFL Pro Bowl in each of his 8 - NFL seasons, and he has been a first - team All - Pro selection an amazing 7 - times. Aaron is 1 of 3 - defensive players since the 1970 NFL / AFL merger to be granted an NFL Pro Bowl selection in each of their 1st - 8 NFL seasons, alongside the Hall of Famers in Lawrence Taylor and Derrick Thomas.