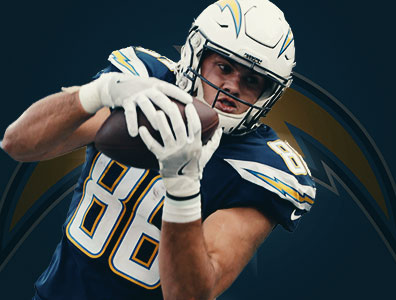 On Sunday, September 8th, 2019 the Los Angeles Chargers battled the Indianapolis Colts and won the close and excited game in overtime 30-24. During this game, the Charger’s tight end, Hunter Henry, suffered a fracture to his left knee during the second half after being hit low by a Colts defender. Although he was seriously injured, Henry returned to the game and ended up participating in 55 of the 59 snaps for the offense of Los Angeles.

On Wednesday, September 11th, 2019 the Chargers announced that Henry suffered a tibial plateau fracture to his left knee, and he will unfortunately have to miss the next four to six weeks of football activities for LA. The team will evaluate the injury on a week to week basis, and there is no official timetable for his return to the team.

Henry missed all of the 2018-2019 NFL regular season due to a torn ACL. He was only able to play in 14 snaps during the Chargers loss to the New England Patriots in the AFC divisional round of the playoffs last season.

During the 2017-2018 season, Henry suffered a lacerated kidney forcing him to miss the last two games of the year. Prior to that a knee injury sidelined him for one football game during his rookie campaign for the Los Angeles Chargers.

"He's taking it tough, but he's doing fine," says the head coach of the Los Angeles Chargers, Anthony Lynn. "He wants to be here with his teammates. He wants to play. And not being out there with them, he feels like he's letting them down. But he's not. You can't control these things. You can only control what you can control.

"It's obviously disappointing," explained Chargers quarterback, Philip Rivers. "You hate it for him. You saw how excited he was to be out there this year and how hard he worked to get back. From an offensive standpoint, you saw how big a part of it he is and what it was going to be from last week here as the season gets going."