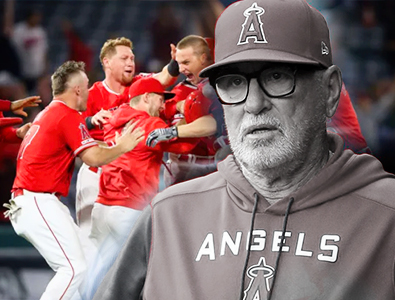 Over the course of the past several days, while the L. A. Angels circumnavigated through a confusing as well as unexpected major losing streak that still has not ended. The current general manager of the Los Angeles Angels, Perry Minasian, got to thinking lately, and he realized a change at the managerial level was probably necessary.

Last Tuesday morning, as Minasian drove into the Angel’s home Stadium following embarrassing loss after embarrassing loss, Perry became overwhelmingly convinced that it was time to relieve Coach Maddon of his duties with the ball club. Minasian first called the L. A. Angels’ owner, Arte Moreno, in order to get the overall approval of the decision to fire Maddon prior to driving over to Joe’s house to personally deliver the bad news to Maddon.

Around two and a half years ago, in October of 2019, Maddon's return to the Los Angeles Angels clubhouse was greatly celebrated, but now following a 12 - consecutive game losing streak Joe’s legacy as a manager was severely tarnished.

"It's tough," Minasian emotionally revealed. "Disappointed it's come to this. I really like the man. It's somebody I'm gonna talk to the rest of my life. Just the conversations daily. Who he is, what he's about? You guys were around him -- the energy he brings, how consistent he is on a daily basis. It's tough. It's tough. But you gotta be able to take emotion out of things and make decisions. I've taken the emotion out of it and taken a step back. Looking at where I'm at, as tough of a decision as it is, I felt like it was the right thing to do."

Phil Nevin has been named as the interim manager of the Los Angeles Angels through the end of the 2022 MLB season according to Minasian. Mike Gallego will fill the role as the club's 3rd - base coach for the time being as well.

The recent 12 - game losing streak is tied for the longest for a single season in franchise history of the L. A. Angels, and it is also tied for the 2nd - longest since 1900 by a team that was at least 10 games over .500 prior to the losing streak commencing. During that embarrassing and disappointing 12 - game stretch, the Los Angeles Angels had a minus - 43 run differential, a dismal .596 OPS, and a disgraceful team ERA of 6.31.

"There hasn't been one phase of the game where we've been good," Minasian goes on to say. "We've struggled on the mound, we've struggled at the plate, we've struggled defensively, we've struggled baserunning. The one thing I will say is the effort's been great. I believe in this group. I know we've gone through a tough stretch, but we have 106 games left. And I'm excited about the 106 games."

The Rise and Fall of Joe Maddon as an MLB Manager

The now 68 - year - old Maddon, was in just his 3rd - season with “The Halos” prior to spending the majority of 4 - decades as a player and as a coach, mostly in the minor league baseball farm system. Joe was Mike Scioscia's bench coach on the Angels ball club that won the 2002 World Series, before going on to a largely successful 9 - year stretch as the manager of the very low - budget Tampa Bay Rays, with whom he won 2 of his 3 - MLB manager of the year awards.

Back in 2016, he led the Chicago Cubs to their 1st - World Series championship title in over 100 - years, but it never quite worked out this time around with the high payroll of the talented but underperforming Los Angeles Angels.

"You always rely on people in charge to read the tea leaves properly. This time, they did not," Maddon said. "You can ask any of the players or coaches. They're the ones who really know. Perry was in a tough spot. I understand that. Let me put it that way. I would really rely on the sentiments of the coaches and the players."

Maddon also said that he had what he believed to be a great working relationship with Minasian, the players, and other coaches of the Angels’ organization.

"Obviously, 12 [consecutive] losses are no fun for anybody," Maddon continues to say. "But there are people who get it, who can easily see why. It's not to point the finger at just one particular person. We just needed to get the guys back on track, get a couple of wins, get the mojo going again. But we didn't get that opportunity." 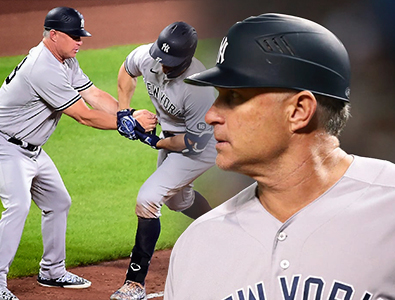 Maddon's replacement as the big - league team’s manager in Nevin, scraped out a 12 - year professional MLB baseball playing career prior to becoming a coach in the minor league farm systems of the Detroit Tigers as well as the Arizona Diamondbacks. The now 51 - year - old Nevin worked as a 3rd - base coach for the New York Yankees over the last 4 - MLB seasons.

Throughout his coaching career Phil has become well known for his fiery personality and youthful energy. Minasian knows him from their time together with the Texas Rangers from 2005 to 2006, and he hopes that Nevin will light a spark under the asses of the Los Angeles Angels players now as it is obvious that they need it.

"People know that I've wanted to have this opportunity, and this isn't how I envisioned it," Nevin stated. "I envisioned this being a happy, great day, and addressing the media, the players, the staff, but obviously this is under different circumstances. And I don't feel those same emotions. I am excited. Absolutely. I'm excited for this opportunity. The conversation I had with Joe earlier really set me at ease. He was great; told me to just take this and run with it and be the person I am, which I plan to do. So that made it easier on me, because it has been an emotional day."

Joe had initially signed with the Angels MLB franchise way back in 1975 as an undrafted catcher, and ever since then he was a part of the storied franchise as a player, a coach, and eventually a manager of the team at one point or another. He was a coach on the squad under 5 - different managers, and he was able to attain an interim managerial position with the Angels a couple of times during his long tenure with the ball club.

Under the tutelage of the Angels former manager, Mike Scioscia, Maddon was a bench coach with that ball club, and he helped lead that team to a World Series championship back in 2002. From 2006 until 2014 he got the job as the manager of the Tampa Bay Rays, and he ultimately led them to a World Series appearance back in 2008 with a very small payroll. Joe won the American League manager of the year award that season as well as in 2011 with the Tampa Bay Rays.

In 2015, Maddon accepted the position of taking over as the Chicago Cubs manager. That year he won his third manager of the year award as he led the young and inexperienced Chicago Cubs to the NLCS from the wild card position in the 2015 MLB postseason. The following year he helped his club achieve the ultimate and back at that time seemingly unachievable goal of winning the World Series with the then cursed Chicago Cubs who had not won a World Series title since the year of 1908.

Maddon continued to manage the Chicago Cubs with their sky - high expectations for the next few years until the lack of playoff success eventually resulted in him and the Chicago Cubs moving on in different directions.

Joe then decided to head back to Los Angeles to manage the Angels where his coaching career took off from originally. Maddon will forever be remembered as the man that got the Chicago Cubs to overcome their curse and finally win that elusive World Series back in 2016. At that time the Los Angeles Angels were lucky to have hired such a proven, successful, and unique manager to lead their big - league team that was loaded with talent such as Mike Trout, Shohei Ohtani, Anthony Rendon, and others as well.

It’s a shame that things did not work out for Maddon at the helm of the Los Angeles Angels this time around. Luckily for him, if he chooses to continuing managing in the big - leagues there are a handful of teams that would gladly welcome him in with open arms.