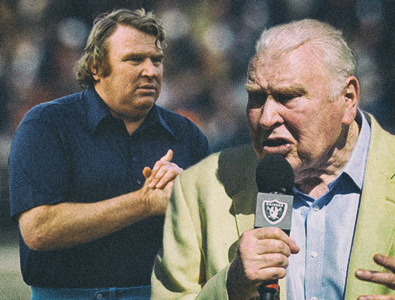 On Tuesday, December 28th, 2021 the legendary and historic icon of the National Football League, John Madden, passed away at the tender age of 85 – years – old. Madden was most well - known for leading his Oakland Raiders to an AFL championship as well as a Super Bowl XI victory as well as becoming one of the greatest if not the best NFL broadcasters of all – time. John also was extremely innovative and creative as he and EA Sports brought the video game of Madden NFL Football to millions of players across the world for the past several decades.

John Madden as the Head Coach of the Oakland Raiders

Madden went from the defensive coordinator of the San Diego State Aztec football team (1964 – 1966) to the head coach of the Oakland Raiders from 1967 to 1978. During that time John led the Oakland Raiders to the AFL championship in 1967 as well as the Super Bowl XI championship in 1977 when his Oakland Raiders defeated the Minnesota Vikings with a final score of 32 to 14. Madden’s overall NFL regular season record as a head coach over his 10 – year – NFL – coaching career was 103, 32, and 7 which was good for a winning percentage of .759.

John Madden as a Broadcaster of the National Football League

John went straight from the sidelines as a head coach of the Raiders into the booth as an NFL broadcaster, and Madden touched the hearts of so many as he made the game of football relatable for the casual viewers as well as those who really knew the sport well. He was fun to listen to, and John helped bring the excitement of NFL football games in to the living rooms of millions of Americans each and every Sunday.

Madden worked for CBS Sports from 1979 to 1993, Fox Sports from 1994 to 2001, ABC Sports from 2002 to 2005, and he worked with NBC Sports from 2006 to 2008. Most will remember John calling games with his partner on the air in Pat Summerall. Due to the fact that John had a major aversion to flying, he had one hell of a customized bus named the “Madden Cruiser” that would transport Madden all across the country during his broadcasting days. It was believed that John did not like flying due to him losing people close to him in a plane crash back in the 1960’s.

Madden has appeared in a variety of featured films such as “Little Giants” and “The Replacements.” John could be seen and heard all over the television and radio throughout various advertising campaigns throughout the years. He did commercials for Ace Hardware, Outback Steakhouse (the corporate sponsor of the Madden Cruiser), Verizon Wireless, Rent – A - Center, Miller Lite, Toyota, Sirius Satellite Radio, and "Tough Actin" Tinactin just to name a few of them.

Madden made a huge splash with his video game series of “John Madden Football” and “Madden NFL”. These video games were and still are hugely popular, and they have been best sellers for decades. As a pioneer John envisioned these games as teaching tool as well as a way to test plays, and they have made the game of football popular amongst gamers who would not normally be into watching or playing sports. 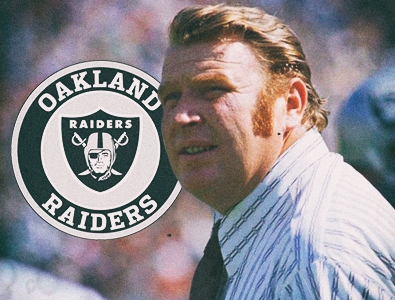 "Few individuals meant as much to the growth and popularity of professional football as Coach Madden, whose impact on the game both on and off the field was immeasurable,” says the now Las Vegas Raiders said in recently released statement just hours prior to the team owner, Mark Davis, lighting the Al Davis Torch in honor of Madden, the first person to ever light the torch on October 16, 2011.

"Tonight, I light the torch in honor of and tribute to John Madden and Al Davis, who declared that the fire that burns the brightest in the Raiders Organization is the will to win," Mark Davis expressed.

Current NFL broadcaster, Al Michaels, who was Madden's NFL broadcast partner for 7 - years on ABC and NBC, stated working with Madden, "Was like hitting the lottery."

"He was so much more than just football -- a keen observer of everything around him and a man who could carry on a smart conversation about hundreds and hundreds of topics," Michaels goes on to say. "The term 'Renaissance man' is tossed around a little too loosely these days, but John was as close as you can come."