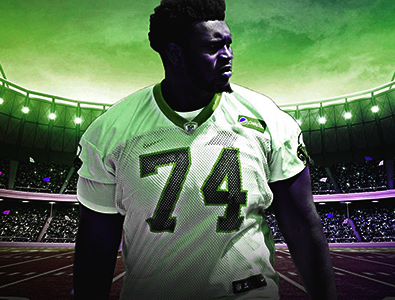 Kendrick Norton is a 22-year old football player from Jacksonville, Florida. After lacing up his cleats at the University of Miami the young defensive tackle entered the 2018 NFL Draft. The Carolina Panthers selected Norton in the 7th round by the Carolina Panthers with the 242nd overall pick.

On September 1st, 2018 the Carolina Panthers waived Norton, and he was signed to the practice squad the very next day. On September 6th, 2018 he was released, but ended up resigning four short days later.

The Miami Dolphins brought the Florida native back home when they signed Norton off of the Carolina Panther’s practice squad on December 19th, 2018. He was happy to be back in Florida with hopes of making the Miami Dolphin’s 53 man roster prior to the start of the 2019 – 2020 NFL season. Everything was looking up for the young defensive lineman out of the U.

On Thursday, July 4th, 2019 at 1:18 a.m. Norton was driving west on the Dolphin Expressway (State Road 836) with his girlfriend in his vehicle with him. The young NFL player’s Ford F – 250 hit a concrete barrier and flipped onto its roof near the Palmetto Expressway which is close to Miami, Florida.

A friend of the Norton family claimed that Kendrick’s truck was cut off prior to it flipping onto the roof. Although the defensive tackle suffered extremely severe injuries to his left arm as well as cuts to his head the injuries are not considered life threatening. His girlfriend endured an injury to her hand.

There was reportedly another vehicle involved in the accident, and Jessie Pena was the other driver. She was in a 2015 Maserati, and Pena did not suffer any injuries from the crash. There is an ongoing investigation into the incident, but no other details have been released.

Norton first responded to by Miami-Dade Fire Rescue crews and was rushed to Jackson Memorial Hospital's Ryder Trauma Center. Unfortunately, the 22-year-old football player’s arm was unable to be saved and had to be amputated.

Other Situations that Relate

Former New York Giants player Jason Pierre – Paul also lost a body part over the Fourth of July several years ago. During an accident with fireworks this defensive lineman lost fingers, and his incident also occurred in Florida as that happened in Deerfield Beach, FL in 2015.

Pierre-Paul was able to continue his NFL career after losing those pieces of one of his hands but playing football without an arm will be highly unlikely for Norton. He is not a proven star and was fighting to make the roster of an NFL organization prior to his car accident. This is an extremely unfortunate event for him as it looks like he will have to find a different line of work in which he can perform the duties of the job with only one arm.

"With sadness, I can confirm that Kendrick Norton was in a car accident last night and suffered multiple injuries, including the amputation of his arm," tweets Norton’s agent Malki Kawa. "We ask that you continue to pray for him."

"We were made aware this morning of a serious car accident involving Kendrick Norton," says

the Miami Dolphins of the AFC East in a statement they released. "Our thoughts and prayers are with Kendrick and his family during this time."

“The U family is praying for Kendrick, his family and the medical professionals helping him this morning,” explained Manny Diaz who was Norton’s coach at the University of Miami.

“KJ is a fighter!! And he will fight through this!” Kendrick’s mother exclaimed. “Yes, he did lose his arm but he’s got his life! We ask for respect and privacy during this time for him to heal and grieve for what he has lost so that he can get up and fight for all the many blessings he still has and WILL have!”

“Arm just a limb when you got the heart of a lion,” said a fan.

“There’s a different path for your life and I’m sure it’ll be inspirational,” says another fan.

“‘He’s got his life.’ Outpouring of support for Dolphins player who lost arm in crash”, Martin Vassolo, miamiherald.com, July 5, 2019.