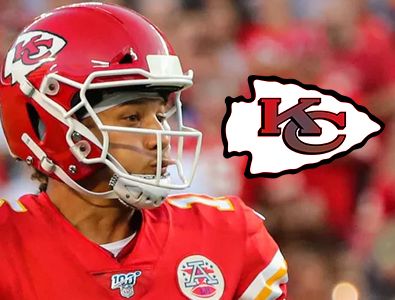 On Monday, July 6th, 2020 the Kansas City Chiefs signed their young superstar MVP quarterback, Patrick Mahomes II, to a long term contract extension. The Kansas City Chiefs provided the best youthful player in the National Football League a ten year extension deal that is worth up to $503 million when incentives are included.

Mahomes has now officially signed the richest valued contract in the history of American professional sports as he has now surpassed Mike Trout of the Anaheim Angles in Major League Baseball. Trout signed a 12-year $426.5 million agreement in March of 2019. Although Trout’s deal with the Anaheim Angels is fully guaranteed, Patrick is still ensured an extremely hefty amount of money from the Chiefs.

The QB was born on September 17th, 1995 in Tyler, Texas to his parents Pat and Randi. Patrick’s father, Pat, was a professional baseball player that pitched for the Minnesota Twins, the Boston Red Sox, the New York Mets, the Texas Rangers, the Chicago Cubs, and Pittsburgh Pirates throughout his career in the MLB. His son, Patrick, followed in his footsteps by taking to the major American sports early on in life. Mahomes II played and excelled at basketball, football, and baseball in high school while he attended Whitehouse High School in Whitehouse, Texas.

Mahomes II then decided to enroll at Texas Tech University after graduating high school as a three sport superstar athlete. In 2014 the Detroit Tigers drafted Mahomes in the 37th round of the 2014 MLB draft, but Patrick did not choose to sign with that Major League Baseball franchise at that time.

He began his freshman campaign as a back up quarterback to Davis Webb, but after Webb failed to remain healthy Mahomes got his chance to step in as the starting QB at Texas Tech University. Patrick was also was a relief pitcher for the Texas Tech Red Raiders baseball team too, although he decided to focus on playing football at the quarterback position for the Red Raiders of Texas Tech.

After a very satisfying junior season as the starting QB of the Texas Tech Red Raiders Mahomes completed the year by leading the country in passing yards with 5052, yards per game with 421, points responsible for with 318, total offense with 5312, and total touchdowns with 53. Patrick was selected by the Kansas City Chiefs with the 10th overall pick in the 2017 National Football League draft. 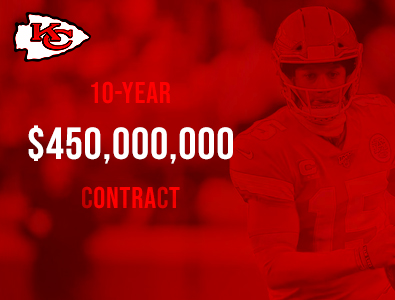 “On July 20th, 2017, the Chiefs signed Mahomes to a fully guaranteed four-year, $16.42 million contract that included a signing bonus of $10.08 million. The Chiefs announced on December 27th, 2017, that with a playoff spot and the fourth seed in the playoffs secured, they would rest starter Alex Smith and give Mahomes his first career start in their Week 17 game against the Denver Broncos. Mahomes played most of the game and helped lead the Chiefs to a 27–24 win, and completed 22 of 35 passes for 284 yards with an interception.”

This was the only the beginning of the legendary status of Patrick Mahomes taking off while being an NFL rookie starting quarterback coming into fruition in front on the nation’s eyes. Throughout his 2018 – 2019 and 2019 – 2020 seasons in the National Football League Mahomes did nothing but inspire comments such as he may be the best quarterback the NFL has ever seen.

Just look at the numbers which are listed below to accompany the amazing accolades he has acquired within the last two to three years. These such accomplishments include winning the Super Bowl LIV championship of the National Football League. He was awarded the Super Bowl LIV MVP as well. Mahomes won the 2018 NFL regular season MVP which keep in mind was his true rookie season.

Mahomes was selected as a Pro Bowl quarterback for the AFC in both of his two first years as a true starting quarterback for the Kansas City Chiefs. In 2018, he was named to the NFL’s First Team All Pro as well as acquiring the 2018’s NFL Offensive Player of the Year Award, the Bert Bell Award, and while leading the National Football League in passing touchdowns with a total of 50 TD tosses (tied for second all time with Tom Brady). Let’s keep in mind that was all in his rookie year of professional football.

How did the now 24 year old quarterback of the Kansas City Chiefs follow up that unreal year of 2018? Once again, he single handedly helped capture the victory in Super Bowl LIV while also winning the Super Bowl LIV MVP Award. Mahomes is absolutely unbelievable, captivating, and he is possibly the best American superstar hero in any of the 4 major American professional sports prior to entering his prime as an athlete. The sky is truly the limit for young Patrick Mahomes, and now he is not only a sports icon but a very rich one as well.

I decided to appropriately list the major historical statistics for the Kansas City Chiefs up to this point above so you are able to see not only the immediate impact that Mahomes has made on the legendary franchise already, but the possibility for how far he can take this team over the next decade or maybe two. Between his unbelievable skills, talent, and work ethic at his young tender age he will most likely make a very strong impression upon the above listed franchise encyclopedia of sports knowledge over the course of his prime in the NFL.

"This is a significant moment for our franchise and for the Chiefs Kingdom," says the Kansas City Chiefs chairman Clark Hunt. "Since he joined the Chiefs just a few years ago, Patrick has developed into one of the most prolific athletes in all of sports. With his dynamic play and infectious personality, he is one of the most recognized and beloved figures to put on the Chiefs uniform. He's an extraordinary leader and a credit to the Kansas City community, and I'm delighted that he will be a member of the Chiefs for many years to come."

"His abilities are so rare, and to couple that with an incredible personality is outstanding,'' the Kansas City Chiefs general manager Brett Veach explained. "We're going to continue to do everything we can to surround him with talent, and this deal provides us more flexibility to do that. He's obviously an integral part to our success, and we're thrilled he's going to be the quarterback of the Kansas City Chiefs for a long time.''

"I've had the privilege of coaching a lot of incredible athletes and special people in my career, and Patrick is without question on that list of players," the head coach of the Kansas City Chiefs Andy Reid stated. "The best part is he's still early in his career. He's a natural leader and always grinding, whether that's on the field, in the weight room or watching film, he wants to be the best. He's a competitor and his teammates feed off his energy. He makes us all better as an organization and we are blessed he's going to be our quarterback for years to come."