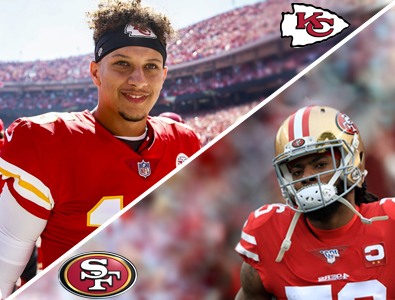 Super Bowl LIV was played on Sunday, February 2nd, 2020 at the Hard Rock Stadium in Miami Gardens, Florida between the San Francisco 49ers and the Kansas City Chiefs. This was an amazing game, and it was exciting from start to finish.

The first score of Super Bowl LIV came halfway through the first quarter of the contest when Robbie Gould capped off a 10 play 62 yard drive with a 38 yard field goal. Patrick Mahomes answered with a long drive of his own in which he finished up on a 1 yard touchdown run. The first quarter ended with the score being 7 to 3 in favor of the Kansas City Chiefs.

The scoring in the second quarter began with a 31 yard field goal by Chief’s place kicker Harrison Butker. Kansas City now led 10 to 3 early on in this match up. The San Francisco 49ers managed to tie the game when Jimmy Garoppolo connected with Kyle Juszczyk on a 15 yard touchdown completion. At halftime of the Super Bowl the game was tied at 10 points apiece.

The third quarter of the game was dominated by the 49ers. Robbie Gould kicked another field goal this time from 42 yards out. The Niners followed that up by Raheem Mostert running in a 1 yard touchdown rush to put San Francisco up 20 to 10.

The Chiefs defeated the San Francisco 49ers in Super Bowl LIV. Patrick Mahomes was named the Super Bowl MVP. He finished the game with 286 passing yards, 2 passing touchdowns, 2 interceptions, and a rushing touchdown. By far not his best game, but he led his team to victory from behind like he has done throughout the 2019 – 2020 NFL playoffs. Now during his first two NFL seasons Mahomes has won the regular season MVP as well as the Super Bowl MVP. That kid has a very bright future in professional football as long as he stays healthy.

"We never lost faith," Mahomes stated. "That's the biggest thing. Everybody on this team, no one had their head down. We believed in each other. That's what we preached all year long."

“This is what it’s all about," says Andy Reid as the Kansas City Chiefs celebrated their Super Bowl LIV championship under the falling confetti. “What a great team, great coaches. Appreciate every bit of it."

“We'll lick our wounds and we'll get over this," Kyle Shanahan explained.

“It’s a beautiful trophy," Chiefs owner Clark Hunt proclaimed. “I’m so happy for our players, coaches and fans. And especially Andy Reid. Nobody deserves this trophy more than Andy Reid." 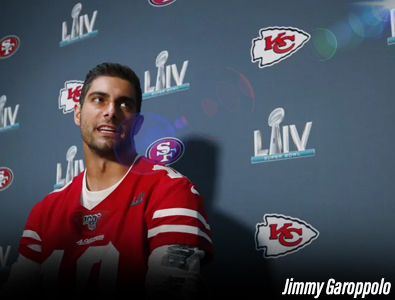 “We have heart,” says Mahomes. "We never give up and those guys around us, the leaders on the team, have that mindset that we never give up."

“We have an ability as a team not just on offense, as team, to figure out what the other team is doing and put our foot in the ground and say enough is enough," Travis Kelce exclaimed. “It's special."

"The third quarter didn't go the way I wanted it to," says Mahomes. "I tried to force some things and got some turnovers. But the guys believed in me and gave me confidence to try and find my way at the end."

"Just his resolve," Chiefs right tackle Mitchell Schwartz explained. "Something we've seen from him his whole career. He's one of the most competitive guys I know, and he's going to make sure he's prepared for whatever happens. It's hard to come up with things to say about Pat, because you all know how frickin' special he is."

"He kept firing, that's what he did," Reid stated. "The guys around him just believed in him. We all did, all the coaches likewise."

"They were playing this kind of robber coverage all game long where the safety was coming down and kind of robbing all our deep cross routes," says Mahomes. "And we had a good playcall there where we had [tight end] Travis Kelce do a little stutter deep cross and Tyreek getting one-on-one with the safety. But the biggest thing we needed was really good protection. It was a long route."

"So we got some good protection by the offensive line, they gave me enough time, I put it out there and Tyreek made a great play," Mahomes proclaimed.

"That's who he is," says Chiefs fullback Anthony Sherman. "He throws a pick, whatever. If we get the ball back, he will make up for it. He's going to find a way. He's not going to be denied a Super Bowl ring."

“Patrick Mahomes to the rescue just in time to save Chiefs in Super Bowl LIV”, Dan Graziano, espn.com, February 3, 2020.