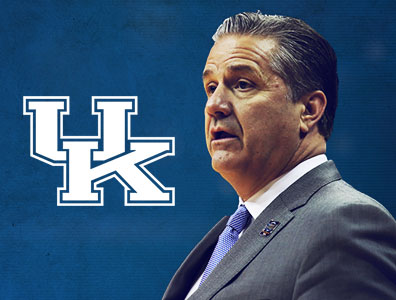 John Calipari and the University of Kentucky agree on a contract extension that will keep him as their head coach until he retires. Once he retires from the head coaching the Wildcats, the school will keep him on the payroll as an ambassador to KU.

...for a new big name head coach after they let go of Steve Alford at the end of December 2018. UCLA recently tried to persuade John Calipari to leave Kentucky and coach the Bruins, and that offer was reportedly a six-year deal for $48 million. Calipari turned down that proposal confirming his desire to remain the head coach of Kentucky by saying, “Where else would I want to coach? It has nothing to do with the other stuff ... people call every year. They presented it to me, and I appreciate it.”

Before this new contract agreement, John Calipari was already the highest paid basketball coach in the United States of America. He currently was under terms keeping the coaching guru at the University of Kentucky through the year 2024. John is set to earn $9.2 million this season with a $2.6 million retention bonus for each of the next 3 years.

Jeff Borzello of ESPN shines a light on John Calipari’s past by saying:

“Kentucky went 30-7 this season, earning a 2-seed in the NCAA tournament and advancing to the Elite Eight before losing to Auburn 77-71 on Sunday.

“Calipari has been to four Final Fours with Kentucky, in 2011, 2012, 2014 and 2015, winning the national championship in 2012. The loss to Auburn marked the third season in a row the Wildcats have advanced to the second weekend of the NCAA tournament but fallen short of the Final Four.

“Calipari, 60, has a 305-71 record at Kentucky and official lifetime record of 708-209. He has led his teams to the NCAA tournament 20 times in 27 seasons, with four official Final Fours and one title.

“Calipari has twice taken teams to the Final Four only to have the wins vacated by the NCAA. His 2007-08 Memphis team, which lost to Kansas in the title game, was forced to vacate all 38 wins from the season, including five NCAA tournament wins, because star player Derrick Rose's SAT scores were invalidated. Calipari's UMass team's Final Four appearance in 1996 was erased after it was determined star player Marcus Camby had accepted money from two sports agents.”

Why Calipari is so Good at what he Does

John Calipari is the king of recruiting the top talent athletes to join his teams with his one and done philosophy. Players that are going to enter the NBA draft after their freshman year love the ability to come to Kentucky and become a starter immediately. Players also like the fact of being a part of a powerhouse program to showcase their abilities in front of a national audience frequently as they enjoy all the free publicity.

The players know Kentucky is a contender to win the national championship just about every year as well. Look for the Wildcats to win a March Madness NCAA tournament in the very near future.