KU will not be able to Continue their Big 12 Streak 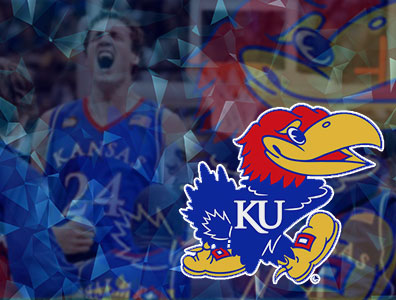 KU was predicted to have another outstanding college basketball season this year. There many factors that contributed to them underperforming in the 2018/2019 regular season. Kansas lost key players over the course of the scheduled regular season games for various reasons. They played poor on the road as well as in the conference. The Big 12 competition was better than expected, and some Jayhawk players did not play up to their potential. Let’s take a look at some of the major aspects that led to the downfall of Kansas.

The Injury to Udoka Azubuike

Udoka Azubuike is a 7-foot 270 lb. beast of a young man. His presence on the court is irreplaceable for KU on both offense and defense as he began the year dominating both sides of the ball. Azubuike was averaging just under 20 points and 10 rebounds per game while shutting down the inside attack of opponents and blocking shots. 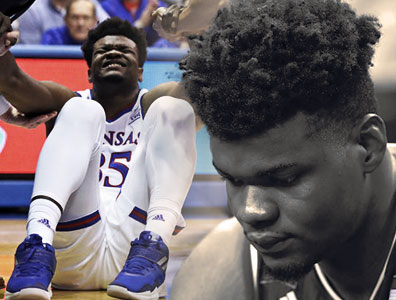 …against Wofford causing him to miss four games. Upon his return he continued to be a major force for the Jayhawks until he tore ligaments in his right hand during practice. This injury ultimately ended his college basketball season as he needed surgery to repair his shooting hand.

Without Azubuike down low for Kansas his teammates struggled to defend the basket. Some were exhausted from having to pick up more playing minutes, whereas others were undersized to play in the paint and couldn’t defend against the big man of other teams. Rebounding and the ability to score especially close to the bucket were both lost without Udoka in the lineup.

Over the course of the Kansas Jayhawk’s 14 regular season Big 12 titles, they have had a veteran point guard to run the offense. This year they have to rely on the freshman point guard, Devon Dotson. Although Dotson has had a decent first-year performance, he struggles to close out games. Down the stretch, he has been known to turn the ball over under pressure, and he doesn’t always distribute the ball to his best players as most of them are missing from the lineup.

Kansas was counting on the freshman guard, Quentin Grimes, to put up points. He had a great first game against Michigan State where he put up 21 points, but after that, he went downhill in a major way. He is averaging 7.8 points per game this season, and is going through what his head coach, Bill Self, calls a “freshman funk.” Everyone around college basketball expected more out of this top 10 recruit from Texas. 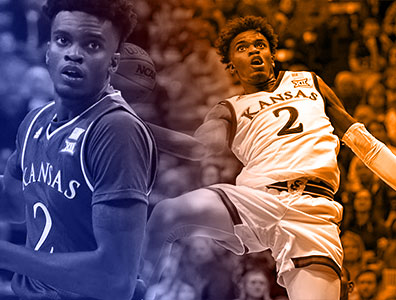 Originally Lagerald Vick was not going to be a part of the 2018/2019 Jayhawks team as he announced he would be entering the 2018 NBA draft after his junior year. Vick ended up withdrawing his name from the draft, and he decided to return to Kansas last summer. He was having a solid year at KU as he emerged as their best shooter especially from downtown. At the beginning of February, Vick announced for personal reason he will be taking an indefinite leave of absence from Kansas basketball and still has not returned to the Jayhawks. It seems as if he will be done playing college basketball, but it is hard to say.

Silvio De Sousa and his Eligibility

As a freshman, Silvio De Sousa helped get the University of Kansas to the final four, but this year he has been held out of competition due to his involvement with the Adidas scandal in which they paid players to steer them to play for teams sponsored by Adidas. Without De Sousa all year KU found themselves without another top player.

At the beginning of the college basketball season, no one predicted Kansas to have heavy competition in the Big 12. Teams such as the Texas Tech Red Raiders, the Kansas State Wildcats, the Baylor Bears, and the Iowa State Cyclones have not made it easy on the Jayhawks this year. KU is 11-6 in Big 12 play this year, which is very uncharacteristic of a Bill Self run sports team. As Kansas has dropped throughout the season other teams have picked up their play.