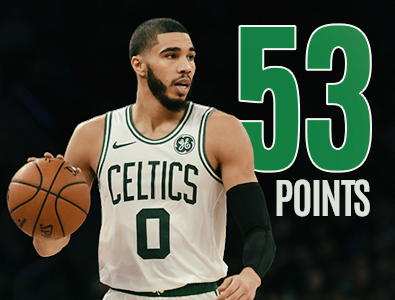 On Friday, April 9th, 2021 the young superstar small forward/power forward, Jayson Tatum, of the Boston Celtics scored his career – high 53 points. Tatum helped lead the Boston Celtics to a 17 – point comeback in order to force the game to be decided in overtime in a hard – fought match up against the Minnesota Timberwolves from the TD Garden Arena located in Boston, Massachusetts.

The Boston Celtics ultimately rode the coattails of their NBA All – Star forward in Jayson to an extremely satisfying victory against the Minnesota Timberwolves with a final score in overtime of 145 to 136. Tatum scored 35 points of his career – best 53 points in the second half as well as the overtime period of the contest, and he posted 18 points in the fourth quarter and overtime period combined.

Following the win for the Boston Celtics Tatum explained, "To score 50 is a big thing in this league and especially at this age. It'll be a night I always remember, and we got the win on top of that -- a big win. Every win right now is big. So we’ll take it."

With his amazing scoring effort on Friday night, Tatum has now become the youngest player in the Boston Celtics franchise history to post a 50 – point performance. Jayson is only 23 – years – old (23 years, 37 days), and the previous record was held by the legendary Larry Bird who had scored 50 – points for the first time in a single basketball game for the Boston Celtics at the age of 26 – years – old (26 years, 113 days). The last time a Boston Celtics player put up 53 – points on the scoreboard was on May 2nd, 2017 when Isiah Thomas did just that to defeat the Washington Wizards in Game 2 of the 2017 Eastern Conference Finals.

In the ball game on Friday, April 9th, 2021 between the Boston Celtics and the Minnesota Timberwolves, Jayson scored 53 points, pulled down 10 rebounds, dished out 4 assists, blocked 1 shot, and only turned the ball over 5 times during the 41 minutes that he was on the court for the Boston Celtics. Tatum shot 16 out of 25 from the field, 6 out of 10 from three – point range, and he drained 15 of his 16 free – throws at the charity stripe. Overall, his performance last Friday was epic, and it is a night that he will always remember as he made Boston Celtics’ franchise history.

Tatum was born and raised in St. Louis, Missouri, and he attended Chaminade College Preparatory School in Creve Coeur, MO. After dominating the basketball landscape during high school, Jayson one of the nation’s top 5 – star recruits. He verbally committed to Duke University over some of his other options at powerhouse college basketball programs including the University of North Carolina, the University of Kentucky, and others.

The now 6 – foot 8 – inch 210 – pound small forward/power forward eventually enrolled at Duke University to play college basketball for the Blue Devils under their legendary head coach, Mike Krzyzewski, who is also known as “Coach K.” Over the course of his freshman year at Duke Tatum averaged 16.8 points, 7.3 rebounds, 2.1 assist, and 1.3 steals per game over the 29 games he participated in. He did miss some game action early on for the Duke Blue Devils as he was dealing with a foot injury.

With the 3rd overall selection in the first round of the 2017 NBA draft the Boston Celtics decided to pick Jayson Tatum. This was a very wise move by the Boston Celtics franchise as he has quickly become their best player and one the best ballers in the National Basketball Association, and he is only 23 – years – old and this year marks just his fourth overall NBA season of his great basketball career.

Over the course of his professional basketball tenure Jayson has averaged 18.8 points per game, 6.1 rebounds per game, 2.6 assists per game, 1.2 steals per game, and 0.7 blocks per game. These numbers continue to increase each and every year he plays in the National Basketball Association as well. 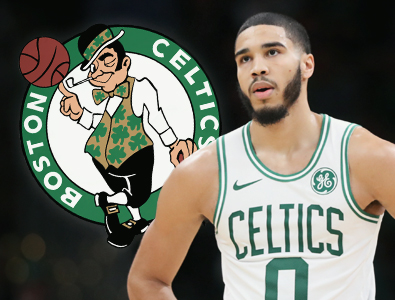 According to Intertops sportsbook these are the odds as of Sunday, April 11th, 2021 to win the 2020 – 2021 NBA championship outright. Currently, the Boston Celtics hold the 12th highest odds out of all 30 active franchises in the National Basketball Association. The Minnesota Timberwolves are in much worse shape as they have the 2nd worst odds to win the 2020 – 2021 NBA championship outright.