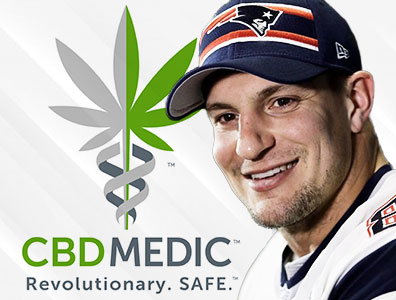 The outspoken former tight end for the New England Patriots, Rob Gronkowski, announced on Tuesday, August 27th, 2019 that he is endorsing a CBD recovery product that has helped him feel better and become pain free. He has partnered with Abacus Health to launch a product line of CBDMedic recovery treatment solutions.

Gronkowski is hoping the NFL will take CBD off the banned substance list under their policy for performance enhancing drugs so that players can use these products in order to recover from the harsh physical punishment that their bodies endure from playing. He has made claims that while using these products after he retired from professional football that he finally feels good again for the first time in quite a while.

While playing at the tight end position for Tom Brady and the New England Patriots, Gronk endured some many injuries it has become hard to keep track of them all. He also had to put his body through nine separate surgeries not to mention all the rehab assignments that go along with the surgical procedures. At one point during his football playing career Rob had such bad internal bleeding in his leg that he had to go to the hospital three consecutive times in order to have 1000 milliliters of blood drained from his severely injured upper leg.

Gronkowski is obviously getting paid a lot of money to endorse the CBDMedic products for Abacus Health, but he is swearing by how great they have helped him since he has retired from playing in the NFL. He is claiming that he is finally pain free for the first time in over ten years. If these products really do help players recover this well it may be time for the league to investigate if they should allow these type of treatment options to their players.

“I immediately made CBDMedic part of my recovery,” Gronkowski explained regarding his new post-retirement treatment. “And now for the first time in more than a decade, I am pain-free. And that is a big deal.”

“[The injuries] took an absolute beating on my mind and my soul. I was hurt both mentally and physically, day in and day out… I decided to walk away from the game for one reason: I had to recover.”

“It’s just time,” he added in reference to allowing NFL players to use CBD in their recovery.

“It’s crazy. I understand. I feel that love. But I want to be clear to my fans: I needed to recover. I was not in a good place. Football was bringing me down. And I didn’t like it. And I was losing that joy in life. Like, the joy. I’m sorry right now,” an emotional Gronkowski remarked. “But … I really was. And I was fighting through it. And I knew what I signed up for and I knew what I was fighting through, and I knew I just needed to fix myself.”

“It’s not normal. It was like record-breaking at the hospital. I was like, you know I like to break records — which I do, I think I broke records on and off the field non-stop, with injuries and everything. That’s what I do.”

“Now, you can just call me Mr. Recovery,” Gronkowski proudly stated. “You know you like that name. Mr. Recovery, baby!”