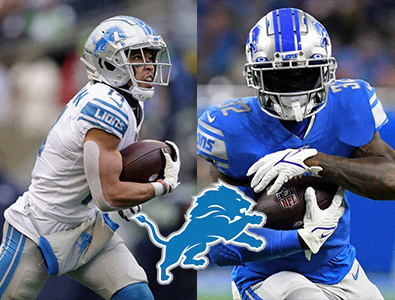 On Friday, September 30th, 2022 the Detroit Lions announced that they will most likely have to play their NFL week 4 match - up against the Seattle Seahawks without their starting wide receiver, Amon - Ra St. Brown, and the Detroit Lions starting running back, D'Andre Swift, according to the Detroit Lions’ head coach, Dan Campbell.

St. Brown sustained a sprained ankle at some point during the Detroit Lions week 3 loss against the Minnesota Vikings, whereas their number one running back Swift is dealing with an ankle injury of his own as well as a sprained shoulder too.

Although both Swift and St. Brown are not going to be out of action for the Detroit Lions offense this Sunday for sure, it definitely seems as if that is the scenario that the struggling Detroit Lions will attempt to manage as they battle against the Seattle Seahawks this weekend. Both of those young and talented skill position players were unable to practice this entire week as they are attempting to recover from their respective injuries.

"Listen, man. That's what it's all about. It's next man up. We've still got [T. J. Hockenson], we've got [D. J.] Chark, we've got [Kalif Raymond], we've got [Quintez] Cephus, we've got Jamaal [Williams]," the head coach of the Detroit Lions, Dan Campbell, explained. "And we've got this O - line and a quarterback that can throw it, so we feel good."

Amon - Ra leads the Detroit Lions in receiving yards with 253 as well as touchdowns with 3 so far during this 2022 - 2023 NFL season as he has been continuing a solid consistent streak of 9 - consecutive games with at least 6 - pass receptions which just so happens to be a Detroit Lions franchise record. Swift is the currently the Detroit Lions' rushing leader as he has compiled a total of 231 - rushing yards this year.