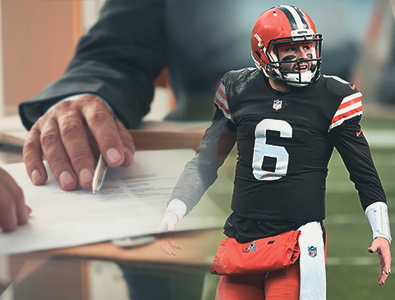 On Friday, April 23rd, 2021 the Cleveland Browns have announced that they have decided to exercise their fifth – year option on their young and talented quarterback, Baker Mayfield, by picking up his 5th year option of his NFL rookie contract for a total of $18.86 million. This ensures that Mayfield will remain with the Cleveland Browns through the 2022 – 2023 season of the National Football League.

Mayfield signed a 4 – year $32,682,440 rookie deal with the Cleveland Browns back in 2018. This agreement included a signing bonus of $21,849,440. There was a total of $32,682,980 of guaranteed money due at the time of signing this deal. Obviously, there was a 5th year option available to the Cleveland Browns in which they wisely exercised.

Now the Cleveland Browns have an additional season to evaluate Baker in order to decide if he should be their number 1 option at quarterback for the future. Mayfield is now scheduled to become an unrestricted free agent following the 2022 – 2023 season of the National Football League. Baker will earn $18.86 million for the upcoming 2021 – 2022 NFL season.

"I hope it is significantly better," the Cleveland Browns head coach, Kevin Stefanski, stated. "He has heard these plays over and over again. We have streamlined concepts, and we have tried to adjust what we do based on his strengths and our players' strengths. I would hope he is much more comfortable from that perspective. That is what time allows you to do -- time together."

Baker was born in Austin, Texas, and he attended Lake Travis High School which is located approximately 20 miles west of Austin, TX where he excelled at the sport of football playing the position of quarterback. Mayfield ended up being the starting quarterback for the Lake Travis High School Cavaliers football team. Baker led LTHS to a record of 25 and 2 during two seasons and won the 2011 4A State Championship. Mayfield finished his high school football career with 6,255 passing yards, 67 touchdowns, and 8 interceptions. 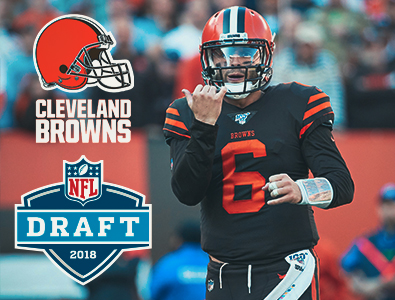 The Cleveland Browns decided to take Baker Mayfield with the first overall selection in the first round of the 2018 NFL Draft. Mayfield has played with the Cleveland Browns from 2018 to the present, and Baker has shown signs of greatness at times while he has shown signs of a young struggling quarterback in the National Football League at other times.

Throughout his 3 – year NFL career Mayfield has recorded 11,115 passing yards, 75 passing touchdowns, 43 interceptions, a completion percentage of 61.9 %, a passer rating of 89.1, 437 rushing yards, and 4 rushing touchdowns. His game has room for improvement, but Mayfield is a passionate leader of the Cleveland Browns offense. Baker displayed signs of greatness last season by getting his team to the NFL playoffs as well as by defeating the Pittsburgh Steelers who are divisional rivals in the Wild Card round of the 2020 – 2021 NFL postseason.

According to Intertops sportsbook these are the odds to win Super Bowl LVI as of Friday, April 23rd, 2021. Currently the Cleveland Browns have the 9th highest odds out of the 32 franchises in the National Football League to win the upcoming Super Bowl LVI.