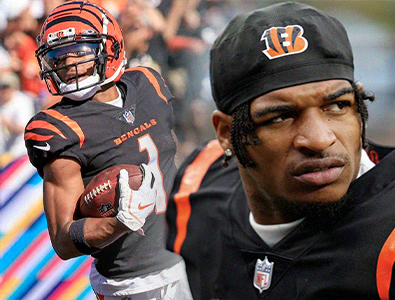 On Thursday, October 27th, 2022 the Cincinnati Bengals announced that their young superstar wide receiver, Ja'Marr Chase, is anticipated to miss somewhere around approximately 4 to 6 weeks of NFL game action due to a hip injury according to sources.

Ja’Marr initially experienced the hip injury during the Cincinnati Bengals week - 6 victory against the New Orleans Saints. Chase was very limited at practice in preparation for last Sunday's winning effort over the pesky Atlanta Falcons in which Ja’Marr managed to pull up hurt and in pain at one point towards the end of his route he was running.

Chase was somehow able to finish last weekend’s game, but he declined to go into detail regarding the severity of his hip injury when Ja’Marr spoke with reporters from the major sports media outlets following the Cincinnati Bengals last game vs. the Atlanta Falcons.

The former LSU Tiger CFP national champion wide receiving product was inspected by a specialist last Wednesday, October 26th, 2022 in order to gather more information regarding his hip injury as Chase was seeking more answers about his current injury as well as to determine a timeline for his return to all football activities for the Cincinnati Bengals.

When he was asked about Ja’Marr’s injury on Thursday, October 27th, 2022 the Cincinnati Bengals head coach, Zac Taylor, responded by saying that the 2nd - year NFL player out of Louisiana State University was dealing with some major discomfort as well as soreness in his hip area, and this injury situation will be continuously monitored and reevaluated on a day - to - day basis as of now.

Due to the fact that this type of injury involves a timeline that varies on quite an individual basis, Ja’Marr could be placed on the NFL’s injured reserve list as Chase will most likely be sidelined for at least 4 - games. Throughout his first 7 - games of this 2022 - 2023 NFL season, Ja’Marr has pulled in a total of 47 - receptions which have been good for 605 - receiving yards as well as a total of 6 - touchdowns.

The Recent Success of the Cincinnati Bengals

Luckily for Chase and the Cincinnati Bengals Ja’Marr will not have to miss more than the next 4 to 6 weeks and hopefully not the rest of the 2022 - 2023 NFL season as hip injuries can often be quite serious and lingering issues that may even result in the reinjury of the player’s lower torso. Only time will tell how bad this injury really is, and how long it will keep Ja’Marr Chase off of the Cincinnati Bengals official 53 - man team roster.

The Cincinnati Bengals next upcoming regular season NFL game will be a Monday Night Football showdown against their in - state AFC North rivals in the Cleveland Browns on Monday, October 31st, 2022 (Halloween).