Should Cincinnati Use Franchise Tag on Receiver A.J. Green? 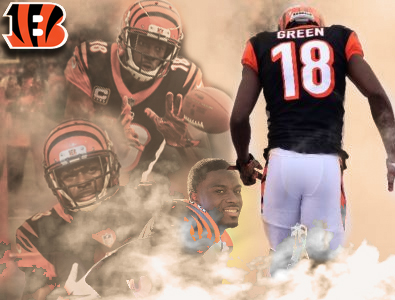 The Cincinnati Bengals have announced that they plan on using the franchise tag on their superstar wide receiver, A.J. Green, for the upcoming 2020 – 2021 NFL season. The one year franchise tag is estimated to be valued at approximately $18.5 million. I believe this is a wise decision to use the franchise tag on him as he has been injured a substantial amount over the last few years.

Green would like a long-term contract from the Bengals as his previous four-year $60 million deal kept him in Cincinnati through last season. He is currently an unrestricted free agent, but both sides have until July 15th, 2020 to agree to terms on a long-term deal.

Previous negotiations stalled towards the end of his last contract that recently expired. If the Bengals front office and Green do not come to terms on a new multi year contract this offseason Cincinnati is planning on using the franchise tag in order to keep one of the best wide receivers in the National Football League with the Bengals struggling organization through the 2020 – 2021 NFL season.

In 2016, Green missed 6 games due to a grade three thigh hamstring tear. He was able to play all 16 games in 2017, but that was the last season that he was able to make it through the year without a major injury keeping him out of the Bengal’s offensive starting line up.

In 2018, the Pro Bowl wide receiver was only able to start as well as play in 9 football games. First, he suffered a grade one inguinal groin pull in the third game of the regular season, but he was able to come back and play the following week. Then on October 28th, 2018 Green sprained his right big toe which ultimately led him to miss 7 games that year.

In 2019, Green tore several ligaments in his left ankle in the first practice of the preseason. This injury caused him to miss the entire 2019 – 2020 NFL season. He is currently back to 100% health, but I understand why the Cincinnati Bengals are apprehensive about extending him a long term deal after all his recent major injuries that he sustained since 2016. Green has only played in one of the Bengal’s last 24 games. 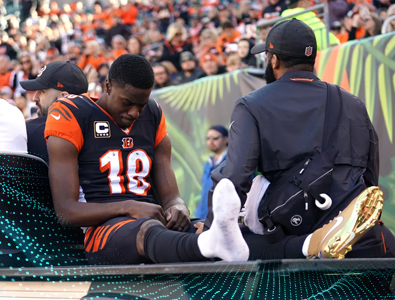 The Cincinnati Bengals are planning on selecting Joe Burrow with the first overall pick in the 2020 NFL draft which begins on April 23rd, 2020. This quarterback out of LSU won the Heisman Trophy as well as the National Championship last year in college football. He set all sorts of records in the NCAA, and he apparently seems like he has great potential to become an outstanding quarterback in the NFL.

Last weekend at the NFL scouting combine Joe Burrow stated publicly that he wants Green to be a part of the Bengals offense as a passing option for him if Cincinnati does draft the LSU quarterback. Obviously, a rookie QB would love to have one of the game’s best wide receivers to throw to in his vulnerable first year in the National Football League. As of now that should happen as long as the Bengals use the franchise tag on Green, and he does not choose to hold out for the 2020 – 2021 NFL season.

According to ESPN, “Green's 8,907 receiving yards rank fourth since he entered the league. He is second in Cincinnati history in total receptions (602), receiving yards (8,907) and receiving touchdowns (63).” The numbers don’t lie, he is one of the best wide receivers in the game at the moment. I am sure there are a lot of other teams that would love to have him on their team roster for the near future.

"He's an important guy, and he's done it the right way," says the Cincinnati Bengals director of player personnel, Duke Tobin. "We view him as a Bengal and want him around and want him to be part of the future."

"I think with any rookie quarterback, the more help you can get, the better, and A.J.'s been one of the best players at his position for a very long time," the Cincinnati Bengals potential first round pick Joe Burrow stated.

"The tag is $18 million, so I'm not running away from that," A.J. Green explained. "But that also shows that they're not committed, and in that circumstance, I have to protect myself."

"He's certainly been a valuable member for the last couple years and done some great things. I'm excited to coach him, really for the first time this next season."

“The franchise tag is not the best thing,” Green expressed. “But like I said, I’m not turning down $18 million. It just happens. When you run a business, you have to make difficult decisions. … I feel like when you put that on me, then that’s what you’re showing me, you only want me for one year. And I always play with a chip on my shoulder.”

“Joe Burrow has made it clear he wants the Bengals to keep A.J. Green, per report: Whether on a new deal or via the franchise tag, A.J. Green figures to be a Bengal in 2020”, Jordan Dajani, cbssports.com, March 2, 2020.