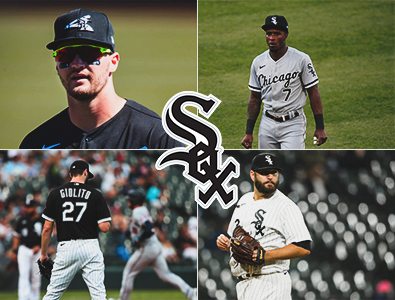 For the majority of the first – half of this MLB season the Chicago White Sox were forced to play without their young star left fielder / designated hitter in Eloy Jimenez. Eloy tore his left pectoral while making an aggressive defensive play against the wall as he attempted to rob a home run during a spring training game.

The Chicago White Sox were also short - handed in the outfield as they had to go a long stretch early on without the services of their young center fielder, Luis Robert. Luis injured his hip flexor in early May, and he did not return to the White Sox starting line – up until early August of 2021. Since both Robert as well as Jimenez returned to the Chicago White Sox big – league team they have been playing excellent baseball especially at the dish as they have been hitting a ton.

One of the Chicago White Sox biggest clubhouse leaders and best all - around ball players in their shortstop Tim Anderson in currently sidelined with a left hamstring strain. Due to the fact that Anderson continues to bounce back and forth from the IL look for the Chicago White Sox to wait until he is completely 100 % healthy before putting him back in to game action especially now that we are vastly approaching the 2021 MLB playoffs. The 2021 Major League Baseball postseason is scheduled to begin on Tuesday, October 5th, 2021 as of now.

The Chicago White Sox outfielder Adam Engel made his way to the 10 – day injured list due to left shoulder inflammation which he has been dealing with on and off since mid - August. Apparently, he will begin his rehab assignment with the Chicago White Sox Triple – A affiliate in the Charlotte Knights this week.

The right – handed starting pitcher for the Chicago White Sox, Lucas Giolito, is temporarily nursing a strained left hamstring. According to sources Giolito may have tweaked his left hammy while fielding a ball awkwardly during his last start against the Pittsburgh Pirates https://wizardofvegas.com/articles/chris-archer-out-until-2021/. This left hamstring strain is mild, and he should not miss too much game action for the Chicago White Sox moving forward.

The All – Star right – handed starting pitcher Lance Lynn was well on his way to the American League Cy Young Award until he began experiencing inflammation in his right knee over the course of his last several starts on the mound for the mighty Chicago White Sox. This injury to Lynn’s knee is also just a minor setback, and the Chicago White Sox only expect Lance to miss one start before getting back to full strength for the first place in the AL Central Chicago White Sox.

At the moment the Chicago White Sox have compiled an overall record of 79 and 58 which is good for a winning percentage of .577 over the course of 2021 MLB regular season so far. They are currently 10.5 games ahead of the Cleveland Indians who hold the second - place spot in the American League Central division of Major League Baseball. With only 25 regular season games remaining for the Chicago White Sox this year, they are sitting in a great place to win the AL Central division.

They have an amazing all – around team this 2021 MLB season, and the Chicago White Sox have an outstanding opportunity to contend for the 2021 Major League Baseball World Series championship. Hopefully for the Chicago White Sox they can continue to play great baseball while avoiding any more injuries as their ball club attempts to heal up prior to the start of the 2021 MLB postseason.

"If it were towards the end of the year, I feel like I'd probably wouldn't do the IL but we are in a spot where we have time on our side," the Chicago White Sox starting pitcher Lucas Giolito expressed. "I'm progressing very nicely. The hamstring is feeling good but at the same time I'm not pushing it. I knew immediately it was pretty mild and the MRI confirmed that."

"Some lingering soreness. Let's get certainty that he's 100 percent. ... The 10 days allows that to happen. The exam today showed a slight hamstring (strain). Will miss at least a start. ... It's optimistic that we'll get him back sooner rather than later," the Chicago White Sox manager Tony La Russa explained in regards to Tim Anderson’s recent injury.

"I pulled my hammy a little bit," says Giolito. "It was a couple pitches after that swinging bunt play. It reminded me of the feeling in 2019 when I pulled my hamstring but it wasn't as intense, so that's why I wanted to keep going and see how I felt, but it didn't want to hold strong, so that's why I came out of the game. I can't see it being very long."

"It's doing all right," the Chicago White Sox starting pitcher Lance Lynn responded. "Hopefully we can use this time here to catch up with it. The schedule works out where we can get back, if not ahead, at least somewhat even with it, where I can manage it start by start. It's ahead of us on the treatment side. We're going to catch back up."