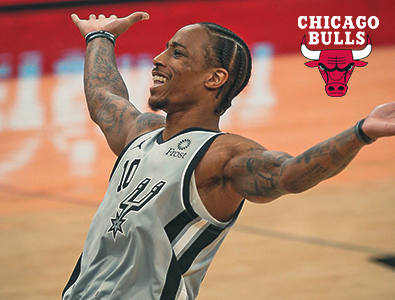 On Tuesday, August 3rd, 2021 the Chicago Bulls made a huge splash in the 2021 free agency market of the National Basketball Association by announcing that the Chicago Bulls have agreed to terms with the San Antonio Spurs on a sign and trade deal in order for the Bulls to acquire NBA All – Star shooting guard / small forward, DeMar DeRozan.

DeRozan is prepared to sign a 3 - year, $85 million contractual agreement with the Chicago Bulls as soon as the National Basketball Association's free - agency moratorium is finally lifted on Friday, August 6th, 2021. The San Antonio Spurs will acquire the 2 forwards in both Thaddeus Young as well as Al - Farouq Aminu from the Chicago Bulls and a Bulls’ future first - round NBA draft pick.

The Chicago Bulls have surprised many individuals who follow the NBA and professional basketball by making some strong moves so far during this 2021 offseason of the National Basketball Association. Along with the acquisition of DeRozan from the San Antonio Spurs the Chicago Bulls picked up Lonzo Ball through a separate sign and trade deal with the New Orleans Pelicans. Ball just signed a 4 – year $85 million contract according to Lonzo’s agent, Rich Paul.

The Chicago Bulls did not stop there as they have also signed the former Los Angeles Lakers point guard, 2020 NBA champion, and current free agent in Alex Caruso. Caruso agreed to terms on a 4 – year contract with the Chicago Bulls that is reportedly worth up to approximately $37 million.

With the great additions of DeRozan, Ball, and Caruso to team up with the highly – talented NBA All – Star Zach LaVine as well as Vucevic the Chicago Bulls should be a much – improved team heading into the upcoming 2021 – 2022 season of the National Basketball Association. The Chicago Bulls have now cut the fat and wasted space on their franchise roster and have added players that can straight score the basketball.

Now there is absolutely no excuse for the Chicago Bulls to not make it to the 2022 NBA playoffs, and the Chicago Bulls should end up somewhere around the 5th seed in the Eastern Conference of the NBA next season. The Bulls have not made an NBA postseason appearance in around 5 years.

The newest addition to the Chicago Bulls starting line – up DeMar DeRozan tweeted: "I want to take the time to thank the Spurs organization and the fans in San Antonio for embracing me the way that they have over the past 3 seasons. The Spurs lived up to their reputation as one of the classiest organizations in the league during my time with the team. I'm grateful for the times I shared with my teammates, our coaches, and staff. THANK YOU!" 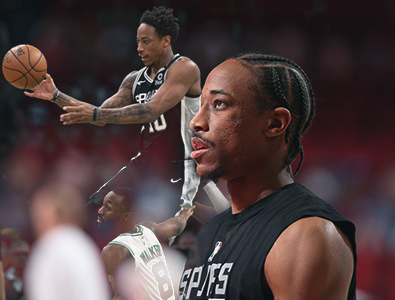 The 6 – foot 6 – inch and 220 – pound shooting guard / small forward was born and raised in the mean streets of Compton, California. He chose to enroll at the University of Southern California (USC) to play his NCAA college basketball at USC with the Trojans from 2008 to 2009. The Toronto Raptors selected DeRozan with the 9th overall pick in the first round of the 2009 NBA Draft.

The one goal he would love nothing more than to accomplish is to become an NBA champion, and now with this new look Chicago Bulls team DeMar may have a chance to compete for an NBA title in the near future. I would love to see the Chicago Bulls back on top of the Eastern Conference and possibly the entire NBA which has not happened since the incredible Michael Jordan era in the 1990’s.