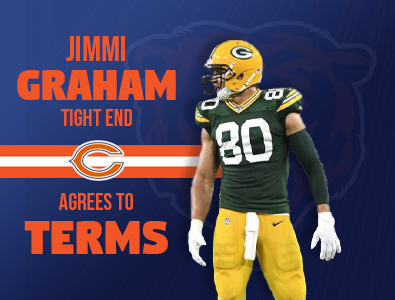 The Chicago Bears have reportedly agreed to terms to sign veteran superstar tight end, Jimmy Graham, to a 2 year contract worth up to $16 million. This new deal includes $9 million in guaranteed money as well. Although he is a tight end, he plays the position more like a wide receiver, and he is known to be a reliable pass catcher who contributes enormous offensive production for his former teams including the New Orleans Saints, the Seattle Seahawks, and the Green Bay Packers.

After two seasons with the Green Bay Packers, Graham was released by the Packers on March 12th, 2020 ultimately resulting in him becoming an unrestricted free agent entering the upcoming 2020 – 2021 NFL season. Prior to Green Bay releasing the North Carolina native he was the highest paid tight end in the National Football League as he was averaging $10 million annually.

For this upcoming NFL season his previous contract would have him taking up the second most salary cap space for a tight end in the league at $11,666,668. Behind only the great Zach Ertz of the Philadelphia Eagles who demands $12.232 million in cap space for the 2020 – 2021 NFL season. Although Graham’s numbers indicate his production has been decreasing over the last few seasons with the Green Bay Packers, the 33 year old crafty veteran is still known as one of the most valuable tight ends in the National Football League.

The Chicago Bears are hoping he can have a bounce back season similar to his time with the Seattle Seahawks or when he was at his best playing for the Drew Brees led New Orleans Saints. According to ESPN, “Graham is the only tight end in NFL history to have two seasons with 1,200-plus receiving yards and 10-plus receiving touchdowns (2011, 2013 with the New Orleans Saints), and he is the only tight end to register four consecutive seasons with 85-plus catches (2011-14, all with the Saints).”

In all honesty the Chicago Bears would be highly satisfied with approximately 60 to 70 percent of those numbers above. Especially coming off an extremely rough 2019 – 2020 NFL season where the Bears offense struggled to put points up on the board. Graham should help with his leadership in the locker room as well. He is a cagey veteran player who has been on some very successful teams over the course of his illustrious career so he knows what it takes to win. I am excited to see him hopefully have a career come back year and help the Chicago Bears make it back to the NFL postseason.