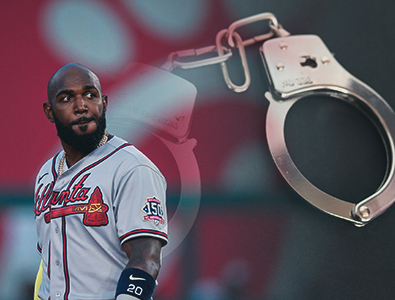 On Saturday May 29th, 2021 the Atlanta Braves’ superstar veteran starting outfielder, Marcell Ozuna, was arrested and charged with felony assault for apparently choking his wife and throwing her against a wall too. This incident occurred in Sandy Springs, Georgia according to sources surrounding the violent altercation.

The 30-year-old is being held in Fulton County jail and the police are officially charging Ozuna with aggravated assault by strangulation which is currently a felony that has the potential to imprison a violator of this law for a minimum of 3 years to a maximum of 20 years in prison. Marcell was also charged with a count of misdemeanor battery in addition to the felony charge of aggravated assault by strangulation.

Ozuna’s arrest last Saturday came right around this time from one year ago when his wife, Genesis, was arrested and charged with a misdemeanor count of domestic battery. It is obvious that both Marcell as well as Genesis are a volatile and explosive couple when together, and hopefully these domestic violence disputes can be put to a permanent halt moving forward.

This domestic violence incident involving Marcell Ozuna will definitely be investigated not only by the Sandy Springs Police Department in Georgia, but also by some representatives of Major League Baseball. These allegations will absolutely influence the professional baseball career of Ozuna, and Marcell is in jeopardy of being hit with massive fines and suspensions from Major League Baseball if he is not altogether banned from the league resulting from this inexcusable domestic violence situation. Some reliable sources around the MLB are reporting that the Atlanta Braves may attempt to convert Marcell’s current 4 – year contract worth up to approximately $65 million to a non – guaranteed deal.

Earlier this week the Atlanta Braves placed Ozuna on the Atlanta Braves’ injured list resulting from multiple fingers being broken due to an awkward slide. The 9 – year Major League Baseball veteran just resigned with the Atlanta Braves organization right after Marcell had one of the best if not his best MLB season last year during the COVID- 19 significantly shortened big – league schedule.

In 2020 Ozuna was considered for the National League Most Valuable Player Award (sixth – place in NL MVP voting) after he carried an outstanding batting average of .338, 18 home runs, 56 RBIs, and 145 total bases on only 267 plate appearances for the Atlanta Braves. Marcell also recorded an on base percentage of .431, a slugging percentage of .636, an on base plus slugging percentage of 1.067, and an OPS + of 173 throughout the 2020 Major League Baseball season. Ozuna led the MLB’s National League in both home runs as well as RBIs last year.

Multiple police officers, "Witnessed the suspect grabbing the victim by the neck and throwing her against a wall. ... In addition to the strangulation attempts, the suspect also struck the victim with his arm which had a cast from a previous injury.” The police stated that Ozuna’s wife, "Did have visible injuries but was not transported to the hospital."

The Atlanta Braves had this to say in their publicly released media statement: "We learned of Marcell Ozuna's arrest earlier this evening and immediately informed the Commissioner's Office. The Braves fully support Major League Baseball's policy on domestic violence which stresses to the fullest that our society cannot and will not tolerate domestic violence in any form. Until the investigation is completed, we will have no further comment."

"The Braves have made a statement. I stand by that and that's all I know," the Atlanta Braves manager Brian Snitker explained.

According to Bovada sportsbook below are the odds to win the MLB 2021 World Series as of Monday, May 31st, 2021. Currently the Atlanta Braves have the 10th highest overall odds to win it all for this exciting 162 game regular season of Major League Baseball in addition to the 2021 MLB playoffs.

“Atlanta Braves' Marcell Ozuna arrested after he choked wife and threw her against a wall, according to police in Georgia”, Jeff Passan, espn.com, May 29, 2021.