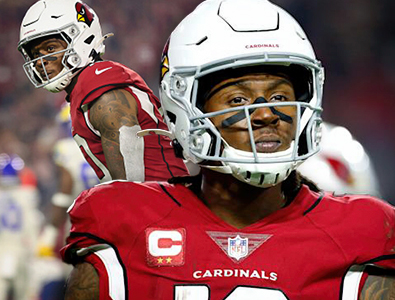 As of now his suspension will begin for the first - 6 games of the 2022 - 2023 season of the National Football League. Hopkins will be allowed to participate in practices and all of the Arizona Cardinals 2022 NFL preseason activities.

The Acquisition of Marquise “Hollywood” Brown

Brown will provide the Arizona Cardinals’ starting quarterback Kyler Murray a true number - 1 receiving option to pass to while DeAndre serves his 6 – game NFL suspension. The other wide receiver threats of the Arizona Cardinals heading into the 2022 – 2023 NFL season include: Rondale Moore, Andy Isabella, Antoine Wesley, and Andre Baccellia.

The 3 - time first - team NFL All - Pro as well as the 5 - time NFL Pro Bowl selection, is set to turn 30 - years - old on June 6th, 2022, and Hopkins is currently coming off quite an injury - riddled season last year that helped lead him to experience the lowest wide receiving output of his amazing career in the National Football League.

DeAndre missed 3 - games in the middle of last year’s NFL season due to a hamstring injury, and he also had to miss the final 4 - games of the 2021 - 2022 NFL regular season, in addition to the Arizona Cardinal’s wild - card loss to the eventual Super Bowl LVI champions in the Los Angeles Rams, after Hopkins endured an MCL injury during their week - 14 match - up on last season’s Monday Night Football highlighted game.

That knee injury was surgically repaired last December of 2021. In February of 2022, while making his interview rounds at the Super Bowl in Los Angeles, California, Hopkins said on Sirius’ XM NFL Radio that his rehabilitation was going really well, and that he was ahead of schedule in his recovery efforts, but apparently Hopkins was most likely using PED’s in order to help him in his recovery from that devastating injury that he suffered last season in the National Football League. 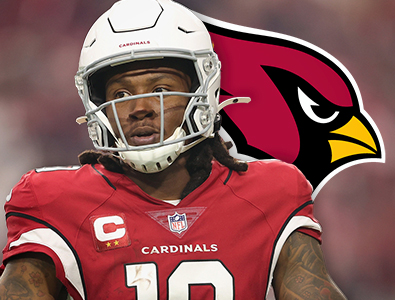 DeAndre completed last year with 572 - receiving yards and 8 - touchdowns on 42 his completions a year after having 1,407 - receiving yards. The Arizona Cardinals ultimately went 3 and 4 without the wide receiving services of DeAndre Hopkins during the 2021 - 2022 regular season of the NFL and was then blown out in the NFL postseason, losing 34 to 11 in that match - up versus the Los Angeles Rams during last season’s NFL playoffs.

Before those recent injuries, Hopkins was as good last year in 2021 as he has been in the past, or possibly even better than that. DeAndre had a higher catch &, yards per target, and yards after catch per catch through Week 8 of last season. Hopkins was down slightly in yards per route, from 2.1 in his 1st - 8 NFL seasons to 2.0 last year.

Hopkins missed only 2 - games over the course of the 1st - 8 seasons of his NFL career before missing 7 - regular season NFL game last seasons.