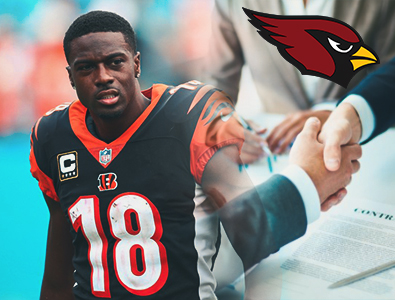 On Wednesday, March 17th, 2021 the Arizona Cardinals have officially announced that they have agreed upon terms to sign the former Cincinnati Bengals veteran free agent superstar wide receiver, A. J. Green, to a 1-year contract worth up to approximately $8.5 million. This is an outstanding acquisition for the rising young Arizona Cardinals who have been making a huge splash this offseason of the National Football League by keep on picking up big-name players to add to their team roster.

This one-year contractual agreement for up to around $8.5 million includes $6 million in total guaranteed money. Although the deal does not include a signing bonus, it does possess incentives allowing Green to ultimately make approximately $8.5 million. A. J. will now once again become an unrestricted free agent following this upcoming 2021-2022 season of the National Football League. The Arizona Cardinals have to be extremely happy to add one of the league’s premier pass catchers to their offensive unit of their professional football team.

Green was born and raised in Summerville, South Carolina where he was a three – sport athlete excelling at football, basketball, as well as track and field. By the end of his high school days A.J. was recruited as one of the best high school prospects to play football at the collegiate level. Eventually he committed to and enrolled at the University of Georgia where he played wide receiver for the Georgia Bulldogs from 2008 to 2010. Following his junior year of college Green made a great name for himself playing football in the SEC, and he declared himself eligible for the 2011 draft of the National Football League. 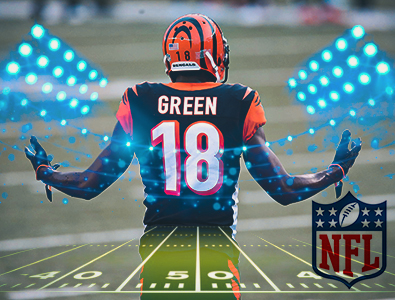 Professional Football Career in the NFL

Green was selected by the Cincinnati Bengals with the fourth overall pick in the first round of the 2011 NFL draft. This draft choice made A. J. the highest NFL drafted wide receiver in the University of Georgia Bulldogs school history. It did not take long for the super talented, fast, and strong wide out to make a lot of noise in the National Football League either. Amazingly he made seven consecutive NFL Pro Bowls from his second season in the league during the 2012 – 2013 NFL season through the 2017 – 2018 NFL season A. J. was a perennial Pro Bowl wide receiver for the Cincinnati Bengals.

Throughout Green’s 10-year career in the National Football League all with the Cincinnati Bengals he has become of the franchise’s greatest wide receivers ever. According to the writers at ESPN, “He finished last season ranked second in Bengal’s franchise history in career receiving yards (9,430), second in touchdowns (65) and second in total receptions (649). Green also holds the team record for consecutive 10 – yard receiving games (five, 2013).”

Now with the undeniable and exciting addition of Green to the Arizona Cardinals their team is looking mighty tough on both sides of the ball entering the upcoming 2021-2022 season of the National Football League. Just this NFL offseason they have acquired big – name players such as defensive end J. J. Watt, wide receiver A. J. Green, place kicker Matt Prater, linebacker Markus Golden, cornerback Rodney Hudson, and others as well. Look for the Arizona Cardinals to now be serious contenders in the highly competitive NFC West and the entire National Football League for that matter during the course of the quickly approaching 2021-2022 NFL season.

According to Intertops sportsbook these are the odds to win Super Bowl LVI as of Thursday, March 18th, 2021.