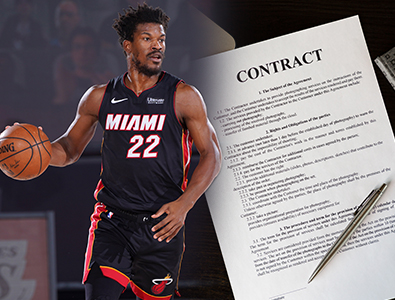 On Saturday, August 7th, 2021 the Miami Heat have announced that they are providing their best player and the five – time NBA All – Star small forward, Jimmy Butler, a 4 – year contract extension worth up to approximately $184 million. Butler’s agent Bernie Lee confirmed this exciting news with ESPN on Saturday.

According to sources around the National Basketball Association Butler was awarded a 4 – year contract extension valued at around $186,592,000. This new deal includes a player option for the 2025 – 2026 NBA season. Jimmy will now earn an average annual salary of $46,648,000, and if he exercises his player option in 2025, he would now be scheduled to become an unrestricted free agent prior to the 2026 – 2027 season of the National Basketball Association when at that time he would be 37 – years – old. This contractual agreement does not seem to include a signing bonus or any other incentives either.

The Basketball Background of Jimmy Butler

The now 6 – foot 7 – inch and 230 – pound small forward / power forward was born in Houston, Texas on September 14th, 1989. Butler attended Tomball High School located in Tomball, Texas. He had an extremely unstable home as his father left him and his family when Jimmy was just an infant, and his mother kicked him out of the house in Tomball, TX when Butler was only 13 – years – old. Butler found sanctuary in a friend’s home as he picked himself up and strived for greatness while still just a young man.

Butler enrolled at Tyler Junior College (TJC) where he played basketball and studied from 2007 to 2008 until he was offered an athletic scholarship to the prestigious Marquette University where he played his NCAA college basketball career for the Golden Eagles from 2008 to 2011. With the 30th overall pick in the first – round of the 2011 NBA Draft the Chicago Bulls invested in the player from Marquette with such a promising future playing ball in the National Basketball Association. 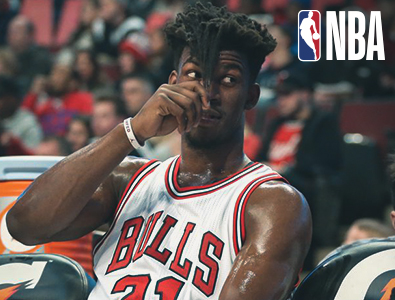 Jimmy played for the Chicago Bulls from 2011 to 2017 where he made his mark as one of the game’s best all around players. He could use his physicality to not only score, but Butler dominated his opponents on the defensive side of the ball as well. On June 22nd, 2017 Jimmy was traded to the Minnesota Timberwolves along with the rights to Justin Patton who was the 16th pick in the 2017 NBA Draft. In exchange for Butler and Patton the Chicago Bulls received NBA All – Star Zach LaVine, Kris Dunn, and the rights to Lauri Markkanen who just so happened to be the 7th the overall pick in the 2017 NBA Draft.

Butler ended up playing for the Minnesota Timberwolves for only 1 NBA season before he demanded a trade out of Minnesota. His wishes were granted on November 12th, 2018 when Jimmy was sent packing to the Philadelphia 76ers. Butler played just one season in Philly, and then he was signed by the Miami Heat via a sign and trade deal made with the Philadelphia 76ers in a 4 – team NBA blockbuster trade agreement.

Jimmy has been tearing it up with the Miami Heat from the 2019 – 2020 NBA season until the present day. Butler helped lead the Miami Heat to the 2020 NBA Finals where although he played his heart out the Miami Heat eventually lost the series to the Los Angeles Lakers in 6 games. Jimmy had an unforgettable performance during Game 3 of the 2020 NBA Finals where he managed to score 40 points, pull down 11 rebounds, and provide his Miami Heat teammates with 13 assists. Unfortunately for Butler and the Miami Heat they were no match for LeBron James, Anthony Davis, and the Los Angeles Lakers who ended up winning the 2020 NBA title following the COVID – 19 shortened NBA season of 2019 – 2020 which finished up having to be played in the NBA playoff bubble located in Orlando, Florida.

Over the course of Butler’s amazing 10 – year career in the National Basketball Association he has averaged 17.4 points per game, 5.2 rebounds per game, and 4.0 assists per game. Those number have increased over the years as last season while playing for the young and highly – talented Miami Heat Jimmy averaged 21.5 points per game, 6.9 rebounds per game, and 7.1 assists per ball game. Butler is still looking to work his way back to the NBA Finals with his Miami Heat team who has been very active during the 2021 NBA offseason by acquiring Kyle Lowry via a sign and trade deal with the Toronto Raptors as well as extending the contract of the young sharp – shooting, Duncan Robinson. The Miami Heat should be somewhere close to the top of the Eastern Conference following the upcoming 2021 – 2022 NBA regular season.

"Jimmy is the anchor and face of our franchise along with Bam [Adebayo] and Kyle [Lowry]," the Miami Heat’s president of basketball operations, Pat Riley, explained during his media statement. "With Jimmy, we get an All - NBA player, an All - NBA Defensive player, tough as nails and a complete player across the board. He's very deserving of this contract as he continually puts himself at the top of the league at his position. Having him in the HEAT organization has been a great, great coup for us."