I recently completed one of my proudest accomplishments, a new strategy for Pai Gow (tiles) which I call the Wizard Way. Before I released this strategy your main choices were to use the casino's house way, which has a higher house edge, or to use optimal strategy, which is so complicated I doubt anybody knows it. My new strategy is an excellent compromise: It is fairly easy enough to be practical to use, but gives the player much better odds than the typical house way, lowering the house edge from 2.44% to only 1.81% on a 5% commission table when the player is not banking. This is very close to the 1.67% edge from using complicated, optimal strategy. This analysis took over 100 hours of work and I believe it is a significant addition to the pai gow literature. Ironically my readers seem to be least excited about the analyses that I consider the most meaningful, but this work has brought me a great deal of satisfaction nevertheless.

The gambling scene in Washington State

I was in Washington State June 3 to 7 and visited casinos in Pullman, Spokane, Seattle, and the Coeur D'Alene casino in Idaho.

According to the 'Ultimate Casino Guide' by Michael Wiesenberg there are 26 Native-American casinos in Washington, which offer full blown- gambling, table games and slots. There are also about 40 small "card rooms" which have poker and up to 15 table games.

This trip I did not visit any of the Indian casinos. However, about three years ago, I did visit the Northern Lights Casino near Anacortes. It was a nice, fairly large, casino with all the usual table games. As I recall, there were no video poker games, nor 3-reel stepper slots. All the slots were video. When I tried to inquire about why, I was quickly rebuked for uttering the word "slot", and told their games were technically not slot machines. To this day I do not understand why, they looked exactly like the video slots here in Vegas. The only difference I could tell was that you couldn't put money in directly, but had to buy a voucher, and then put the voucher in.

The card rooms I visited were: 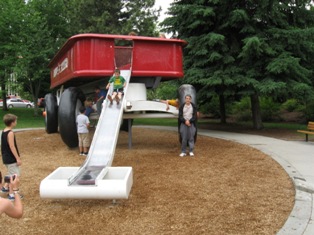 Giant wagon in Spokane. The handle is a slide.

All of these offered Texas Hold 'Em and several table games. What was bizarre was that the number of no-nonsense traditional games like blackjack, craps, baccarat, and roulette, was zero. 100% of the games were either new inventions or a traditional game with a side bet tacked on. To be specific, games I noticed at all casinos were Three Card Poker,Texas Shootout, Fortune Pai Gow Poker, and Spanish 21. I also noticed blackjack games as long as a side bet was tacked on. Often it was Match the Dealer, the same type as in Spanish 21, and I noticed a new one called 2 run 21, which I just analyzed and explained on WizardOfOdds.com. I also saw a new game called Three Card Blackjack was also noticed, which I plan to analyze and write-up soon.

Except for the Silver Dollar casino, near the Seattle airport, all the casinos were fairly empty, although to be fair I was there mid-week. At Jerry's Valley casino they had drawings every half hour among all the players in the casino, and there were only four in the whole place, including me. I was there for two of these drawings and won neither (dang!). The Silver Dollar casino was fairly busy, with an average of about three players per table.

All these casinos had dozens of pull tabs available for purchase, which I didn't patronize, of course, because of the high house edge. Alcoholic drinks are not free to players but are reasonably priced. If I remember correctly a beer was $1.75. Two of the casinos I went to were connected to bowling alleys. All of them were simple affairs, with little decoration or fanfare. The best thing I can say is all of them were wonderfully and totally non-smoking.

Another state to cross off the "visited" list. Just Montana, Wyoming, North Dakota, and Kentucky are left.

On the drive between Pullman and Spokane I decided to drive through Idaho, because it was one of five states I needed to complete by 50-state visit. On the drive I passed by the Coeur D'Alene Casino. This was the opposite of the table game casinos I visited in Washington. It was a vast, quiet place filled with nothing but video based games. There was a smattering of video poker and video keno, but about 95% of the machines were video slots. What little video poker they had was on old machines with stingy pay tables. There was also an off-track racing room. The facility was very clean and modern, with self serve soda bars. However there was nothing I deemed to be playable so I didn't stay long.

I ended the trip with a visit to my father and brother on Vashon Island, near Seattle. On Wednesday night I had my heart set on a weekly $3/$6 poker night at the Eagles Lodge. Unfortunately it was canceled because it conflicted with a baseball game. I would like to put in a good word for the Back Bay Inn in Burton, where I stayed. The restaurant there is outstanding. I've eaten at lots of the high-end restaurants here in Vegas but the dinner I had at the Back Bay was the best meal I've had in years.

Still no money from Neteller

It is now day 182 that my $30,000 in Neteller has been stuck in limbo. In the last newsletter I mentioned that they stated they would establish a plan to return funds to American players after a 75-day investigation. This period ended on June 6, with Neteller issuing another statement (link removed) that they need more time and they extended the tunnel to July 13.

Here's an excerpt from the newest Ask the Wizard, column #191.

Every time I go to the Blackjack games there is a grumpy simple individual, who wants to stone some poor soul for "messing up the shoe." Is there any truth to this? -- Jim. from Las Vegas

In ten years of running this site I have steadfastly denied the myth that bad players cause other players to lose in blackjack. However, you are the lucky 1000th person to ask, so I took the trouble to prove it by random simulation. My program modeled liberal Strip rules over 1.05 billion hands and showed that the first player lost 0.288% when the second player played perfectly, and 0.282% when the second player played poorly. So the house edge of the basic strategy playing first player was almost the same, regardless of whether the second player played correctly or wildly incorrectly. I hope this puts and end the third baseman myth, but I doubt it. As I have said many times, the more ridiculous a belief is, the more tenaciously it tends to be held. (more...

What's new on the site

Michael Bluejay will be back in the next newsletter.

Until next time, set your expectations high.
Read back issues