Lately I've been on both backgammon and a video poker kick. The backgammon has mostly been for fun but I have done well playing against friends. I'll save that as the topic of another newsletter and will focus on video poker this time.

For almost a year now I have met with a small group of professional gamblers about twice a month to discuss good gambling opportunities around town or some topic relevant to the mathematics of gambling. At these meetings there's a lot of talk about video poker opportunities about Vegas. At first I felt out of the loop because video poker was not a priority of mine. However the repeated banter finally got to me and on April 4 I started to play fairly seriously. 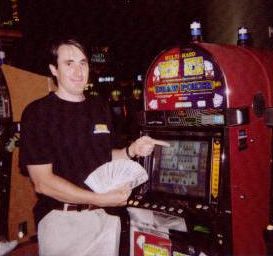 About 75% of my play has been at the Palms. Until last week they had "Not so Ugly Ducks" deuces wild, with returns 99.73% with optimal strategy. I played the $1 and $2 5-play machines. The Palms slot club is comps only at a rate of 0.25% to 0.75%, depending on whether it is a regular day, double points, or triple points. They also send mailers to my home, redeemable for cash or free-play on slots or video poker at the casino. It is somewhat of a mystery how much play you need for the top mailer but I have been getting the $320 or $400 mailer every month since I started, not to mention lots of food and other discounts. There also have many drawings, from which I have won $750. However all this is moot because about a week ago they yanked all the good Not so Ugly Ducks and replaced them with at best "Ugly Duck" machines, which return only 98.91% with perfect play.

Most of the rest of my play has been mostly at the nearby Suncoast and Rampart casinos, taking advantage of double points and gift certificate days. Again, I played Not So Ugly Ducks at both casinos, at either $2 or $5 single line.

During this period from April 4 to the present I have averaged about 4 hours a week of play and put through about a million dollars in action. I'm happy to say I got my first royal flush on a $2 bet on a single line game at the Rampart, for $8000. This happened on the deal after playing only for about two minutes. I also got one on a $1 bet (per line) on a 5-line game at the Palms, for $4000. You can see the pictures above and below of these wins.

I lost count of the number of four-deuces I've hit but it is about 30. Overall I'm down $11,080 on the the cash side, but that's offset somewhat by comps and rewards -- I have received $3000 in gift cards from the Suncoast, travelers checks from the Palms, cash back and drawing winnings from the Palms, am still owed about $2000 in comps at the Palms. So overall I'm down, and invested a lot of time, but I given the volume of my play I think I'm only about one standard deviation south of expectations. 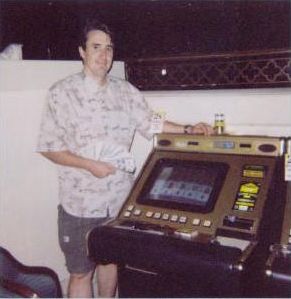 After spending four months playing Not so Ugly Ducks I decided to add a Java game and strategy to the site for that game in particular.

The site already has lots of information about video poker but let me try to impart some additional lessons I learned during the last four months.

Now that the Palms removed their good games I probably will cut down on the video poker substantially. It really wasn't worth my time to begin with but I had fun and feel much more educated on the game as a result.

What's new on the site

Besides the new strategy and Java game for Not So Ugly Ducks mentioned above, I just completed new sections on:

I will also be bringing back the Ask the Wizard column soon after a four-month hiatus.

Until next time, set your expectations high.
From Michael Bluejay....

Yeah, yeah, I know it's a pain to have to come to the website to read the newsletter, rather than just getting it in your mailbox. But here's the deal: About half our subscribers weren't getting the newsletters because their spam filters were incorrectly tagging it as spam. So we're testing out this new method where we just send you a plain text message that the newsletter is available and then you can come read it on the website, and nobody gets hurt. We'll be checking to see how many of you actually make it over here to read the newsletter. If filters were trashing 4000 of our newsletters, and now everyone gets the newsletter but 5000 of you don't bother to click over to read it, then we'll go back to the old method of emailing the actual newsletter out directly to you.

Free book by the Wizard

In each newsletter for a while one lucky subscriber will win a free copy of the Wizard's new book Gambling 102. The winner last time was subscriber #458, Bill Blackburn, which he's hopefully enjoying as we speak. This issue's winner is Tom Mags. Congratulations, Tom!

Bluejay's Internet tip o' the month: Keeping spambots from getting your email address

If you have a website, it's crucial that you protect any email addresses on it. Most webmasters fail to do this and as a result those addresses wind up in the hands of spammers. Here's how that happens and how you can prevent it.

Just like humans can visit a website, automated programs can visit a website too. These programs are called robots, or bots for short. This is how search engines know what text is on which pages, for example — they send out bots to constantly scour the Internet and find out what's there.

But there are evil robots called spambots. They visit all the pages they can find looking for email addresses. When they find an address it gets added to a spam list. If you put a plain email address on a webpage, spammers will get it. It's not a question of whether they will, it's question of when. And usually, the answer is "They already got it, right after you put the page up."

So what can you do to prevent spambots from picking up your address? There are a number of strategies but unfortunately each of them has a downside, usually inconveniencing your site visitors in some way. I run down all the popular methods on my page about combating spambots, but let me share with you what I think is the best general method: Javascripting.

Notice the <NoScript> tag at the end. If a user has JavaScript turned off then the browser shows what's between the <NoScript></NoScript> tags instead. For that part we replace the @ sign with (at), so spambots can't recognize it. Our visitors without JavaScript will have to type in our email address to email us, but at least they'll be able to see it. But probably fewer than 1% of visitors have JavaScript turned off anyway.

If you have a lot of email addresses to script, you could create a function and then just call it whenever you need it. For example, you could put this in the HEAD:

Then create a file called javascript.js which contains the following:

Then anywhere in your document you want to show an email address, just do it like this:

If you have unprotected email addresses on a web page, fix them today!

Part of my job is to play our advertisers if the Wizard hasn't played there for a while, or hasn't played there at all yet. Unfortunately I'm not much of a poker player. I actually only learned how to play Texas Holdem a month ago and just played a couple of online games for free. This would be my very first time playing Holdem for real money, which was kind of intimidating. But I figured I'd just deposit $50 and not care too much if I lost it. The Wizard pays me well enough that I can afford to blow $50.

My goal was to play for an hour without busting out. Since I know squat about poker strategy I kept a copy of the Wizard's guide to hand strength handy. I downloaded the software but had some problems getting logged in. A message came up that said a Flash movie was slowing down my computer and did I want to stop it? I clicked Yes, but the music kept playing, and the "Logging In" message stayed forever. So I quit the software, started it again, and this time told it to keep playing the movie, and I was able to get in. I registered and made my deposit with NETeller, but I forgot to enter the bonus code BONUS30FREE to get the 30% bonus. D'oh. Don't make that mistake! And the bonus code might change, so check out the Promotions page on Poker.com to make sure you get the right code to enter.

I settled in at a $2/$4 Limit Holdem game. Most of my initial hands weren't very good so I folded them right away, and in fact the Wizard says in his Holdem strategy that a good player will fold most of his hands. But this is one reason I don't like poker — it's slow. I want to play, play, play! But here I am, folding my hands and watching everyone else play. Of course in poker patience is rewarded, and you can't win by chasing bad hands. So I consoled myself with the fact that at least I wasn't losing money like some of the other players. And when it was my turn to post the big blind at least I could check for free to maybe see the flop.

The other players were incredibly loose. It was rare to see a fold before the flop, and it seemed like an unreasonable number of players stayed through the showdown every time. That's silly — it's like playing war where everyone gets their card(s) and you see who wins. So I decided to play a little more aggressively, but nothing too crazy. When I finally did jump in with a good hand I not only stayed in but I raised. I figured that that would cause some of the others to fold. I mean, if I'm here folding hand after hand, and I suddenly jump in and raise, then I've either got a good hand or I'm trying to pull off a hell of a bluff, right? But nobody folded. Fine, I thought I might have the nuts so I kept raising. The showdown came and I won. Whoo-hoo!

Then it was back to folding most of my hands, and playing only when I thought I had a good starting hand, and winning most of those. When my hour was up I'd doubled my money to over $100, even without the 30% bonus that I forgot to claim. If I had more patience maybe I should start a new career as a poker player.

I liked the Poker.com software. The interface was pretty easy to use. Especially interesting is the "ALT VIEW" button which gives you a different perspective of the table. And you can turn off the dealer chat so it's easy to see what the other players are saying, though no one said much at my table. And of course, Poker.com offers free-play too, so if you're new and not comfortable playing for real money yet you can easily get some practice in with no risk to you.