Around the World is a game found at Internet casinos using Playtech software. The game can be found under the Arcade Games menu. The game uses a wheel with 52 stops, numbers 1 to 49, plus three special stops. As the player spins, he guesses whether the next number will be higher or lower. The further the player gets and the fewer the incorrect guesses the more the player wins, up to 105 times his original bet. Following are the rules in more detail. 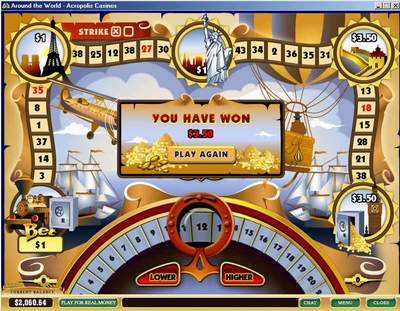 As in slots or video poker once a wager is made it is never returned. So all pays indicated are on a "for one" basis.

On any level the following are the probabilities of each outcome.

Following is the expected return according to various stopping points:

The above table shows the optimal strategy is to play to the end or lose trying. With this strategy the return is 96.95%. In other words the house edge is 3.05%.

I was hired by Playtech to help design all of their Arcade Games, which explains how I know the game in such detail. I was given permission by Playtech to publish this analysis.
Written by:Michael Shackleford