Lucky Charlie is presented as a blackjack side bet in electronic blackjack games called "Casino Wizard." However, I view it more as a game unto itself because it can be played without making a blackjack wager, involves a strong strategy component, and it would be a terrible idea to play Lucky Charlie and blackjack at the same time because the strategies are so different.

The following are the rules for the Lucky Charlie side bet. The description presumes the reader is already familiar with blackjack terminology.

To see the rules from the original help file, please click on the thumbnail below.

The correct hitting strategy is as follows.

An exception is if the player is playing the second hand after splitting and the first hand reached at least four cards. Then, the player should strive to attain a better second-card hand or bust trying.

The correct splitting strategy is to split any pair of 4's or greater.

The following table shows my analysis of Lucky Charlie. The lower right cell shows a house edge of 16.71% (ouch!). 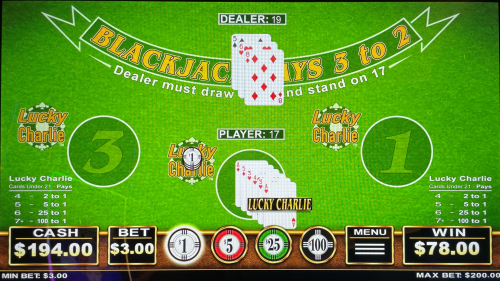 Six-card Charlie, paying 25 to 1. It should be noted the odds favor hitting a six-card total of 17.

The strategy was developed mathematically, assuming infinite decks. Then, a simulation of 74.9 billion initial hands was performed to determine the odds in the table above.