This page refers to the game known as "dice," commonly played by Internet casinos that use cryptocurrency for bets and transactions. The game has nothing to do with six-sided dice, but wins and losses are based on a random number between 0 and 10,000. It should also not be confused with other games titled just "dice."

Suppose a game is set to have a return of 99%. If the player configures his winning odds to 2 for 1, then the game will adjust his probability of winning as 0.99/2 = 49.5%. Goals that will achieve this are:

The player may toggle which of these goals he prefers.

Suppose the player adjusts the winning odds to 3 for 1. Then the game will adjust the probability of winning to 0.99/3 = 33%. Goals that achieve this goal are:

I do not know how ties are handled when the winning goal is an integer. The house edge is 0.01% less if ties push compared to ties lose. 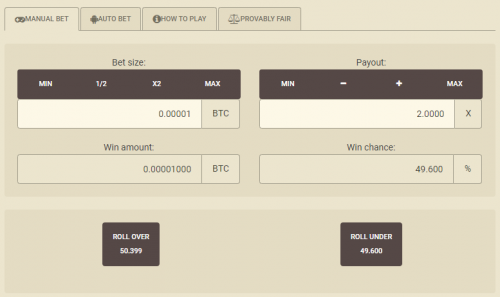 Suppose Amy and Bob want to play a game of rock-paper-scissors remotely and without trust. How could that be done?

It can easily be done by encrypting moves. There are many encryption programs online, like the one at miniwebtool.com. For example, suppose Amy wishes to play scissors. She could encrypt "scissors" and get the following encrypted message, known as a hash.

She could then send it to Bob, before he makes his moving, to prove her move was predestined. Suppose Bob then declares his move as paper. Amy could then claim victory and prove it by telling bob to encrypt the message "scissors" and he will see it hashes to exactly the same hash Amy sent him before his turn.

However, Bob, knowing there are three possible outcomes only, might run "scissors" through a hashing program and know it hashes to the above and then choose rock. To defend against that, Amy should add some other text, random characters will do, to ensure Bob won't be able to decipher her hash. For example, she might encrypt "b980Cql98lbaj -- scissors" and get the following different hash.

Note there are only 16 possible characters in a hash, 0 to 9 and the letters a to f. The whole hash is actually number, written not in base-10, but base-16, known as hexadecimal.

The concept is the same in "probably fair" gaming. However, an additional layer of security is added in letting the player have influence over the outcome of the bet as well. Otherwise, the casino could cheat. For example, noticing the player usually bet "over" in Dice and then giving him a low number as the game result, even if encrypted.

The way it works, in plain simple English, is as follows:

Another way the casino could cheat would be to simply choose a casino seed that hashes to a losing outcome, even if doesn't Hash to the outcome provided to the player before the bet. This is exactly what happened to me when I played at Wixiplay. If you catch the casino in a seed/hash mismatch, what can you do? If you accuse them of cheating they will either deny it without comment or just ignore the accusation. When I was cheated by Wixiplay they initially ignored me. Later, I complained to the Curacao Gaming Control Board and didn't even get the courtesy of a reply.

This script will work for the Dice game at Crypto.Games. Other casinos may determine the random six-digit number a different way or use a hashing program other than SHA-512.

To use my program, go to this PHP Sandbox, follow the directions in the comments at the top regarding when to enter, and click "Execute code." The game outcome and confirmation of a legitimate Server Seed will appear in the Result box below the code.

As a back-up, the button below will reveal my code.

If you don't want to bother verifying the game outcome is fair, at least keep the casino honest by appearing that you are checking. The casino will know if you click on "fair gaming" to verify the outcome. If they were inclined to cheat, common sense would dictate they would be more likely to cheat customers who aren't verifying the outcome.

If you do click "fair gaming," add in at least a few random characters somewhere in the Client Seed. This will prevent the casino from providing a bonus Client Seed that will lead to an outcome the casino wants.

If you do catch a casino cheating, please send me some evidence of it. I would love to verify it and warn other players not to play there, by adding them to my casino blacklist.