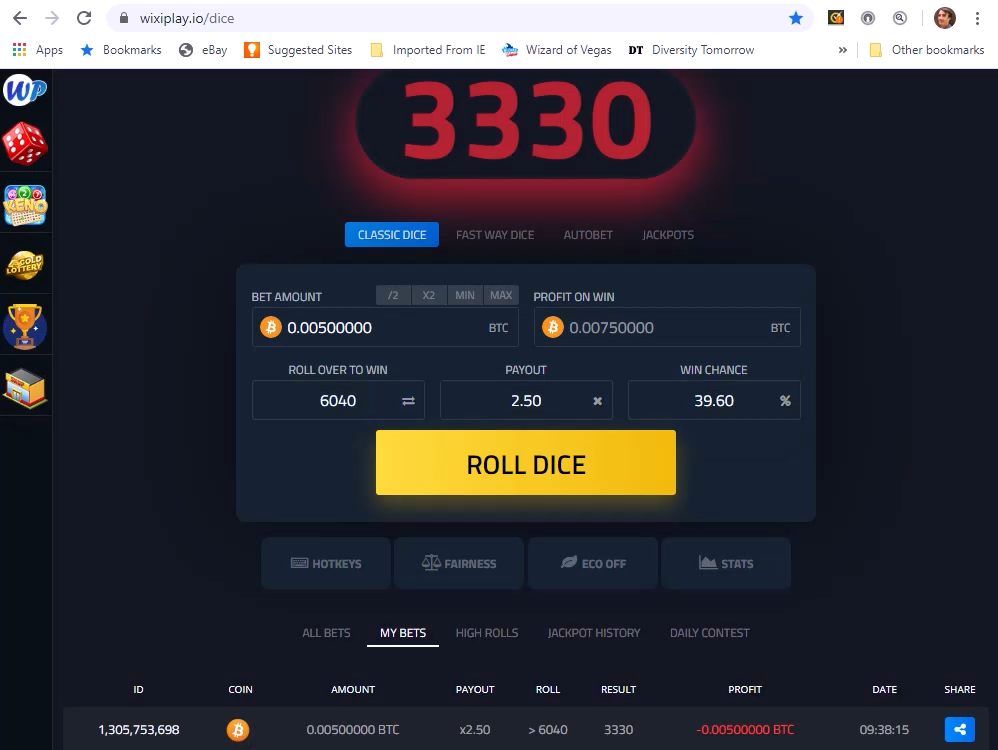 The Wixiplay.io is added to the blacklist on February 27, 2020. The reasons for inclusion are cheating and not paying withdrawals. Following is our investigation.

In early February 2020 it was mentioned to me verbally that Wixiplay was cheating, as evidenced by hash mismatches. I encouraged the player making the accusation to write about it on my forum at Wizard of Vegas, which he did. The thread is titled Wixiplay: A provably rigged online casino.

On February 19, I observed the cheating directly as the poster of the accusation played. He did a screen capture of the play as evidence.

After that, to independently more hash mismatches, I opened an account and played myself. Over the next several days I wagered 192 hands, wagering a total of 0.2347 Bitcoin at a profit of 0.0603 Bitcoin. I checked every losing hand and they all passed a fairness test. However, when I attempted to make a withdrawal on February 22, it was held in limbo for about 24 hours and eventually rejected with my funds returned to my account. I figured it may have been a technical problem, so I attempted a second withdrawal on February 23, the next day. As of this writing, the withdrawal is still being "processed." Clicking on the transaction ID leads to a page at Bitcoin.com that says, "Oops! We can't seem to find the page you're looking for." This suggests to me that Wixiplay never instigated a Bitcoin transfer at all. In my opinion, based on playing online for over 20 years, a casino that accepts deposits but doesn't process withdrawals is a very bad sign of financial trouble.

In case you're thinking that a matter of days to process a withdrawal from an Internet casino is not so bad, this was a Bitcoin withdrawal, which they have the ability to process instantly. Their web site also lists as a feature, "Instant deposits & withdrawals" on the sign-up page.

Later, I cut down the footage taken of the hash mismatch and uploaded it to YouTube, along with annotations that attempt to explain what happened. The videos below endeavor to prove my case.

As a result of this investigation, I also attempt to explain how the hashing process works in another thread at Wizard of Vegas titled Guaranteed Fair Gaming for Dummies.

On February 19 I sent an Email to Wixiplay with an accusation of cheating, giving them an opportunity to make a statement in their defense. No reply to that was ever received. On February 25, I sent an Email asking about the status of my withdrawal of 0.09 Bitcoin (with a value of about $900). To that I got this brief response, "Hello, Right now don't exist any withdrawal in pending. Thank you." To that, I would say it's not pending because they ignored the withdrawal request. This is the only human interaction I have ever had with Wixiplay.

For these reasons, Wixiplay.io is blacklisted for cheating and not paying players.