Between February 13-19, I visited Panama City. One of my objectives was to report on the gambling scene there. This blog entry is my report.

According to Latest Casino Bonuses, there are 18 casinos in Panama City, eight of which have table games while the rest are small and offer only slots. While there, I managed to visit half the casinos, and all but one of the ones featuring table games. I'll start with some generalities and then describe each casino I visited.

The larger casinos devote about the same square footage to table games as they do slots. The vast majority of the slots are video reels. There are very few older, three-reel slots, video poker or video keno games. What little video poker I found offered very poor pay tables.

While most of the casinos were centralized in the Cangrejo section in the center of the city, they were not clustered together like in Las Vegas, Reno or Atlantic City. In general, the larger hotels host their own casino, which is more like an amenity of the hotel, rather than the purpose of it, as in Vegas. However, three hotels do have respectably large casinos, similar in size to the average downtown Las Vegas property.

Customer service is not as good in the Panama City casinos as what I am used to in the United States. Drink service is usually a waitress who comes by with a tray of beer and soft drinks once in a while. At best, about once every half an hour. If you're lucky, a cocktail waitress might take special requests. Unlike in Vegas, drinking is done sparingly in Panama City casinos.

The casinos do offer player reward cards, much like in the US. However, based on signage, it seems that slot players get all the attention. Of the seven casinos I played in, only once was I asked to present a player card, and I was betting more than most players. It would not surprise me if many casinos did not have a formal method of comping table game players. The Veneto casino was the only one that accepted my card when I sat down. At the Crown casino, I tried to give it to the supervisor when I sat down to play, but he just ignored it.

A nice thing about Panama City casinos is tipping was truly not expected and seldom done. I almost never saw anybody tip the dealers or cocktail waitresses. Once, when I tried to make a bet for the dealer in blackjack, she didn't know why I was making two bets in the same spot. When I said the smaller bet was a "propina" (tip) she just took it and put it in the box.

The general attitude in the casinos is very casual. I would say the mood is more about having fun than winning money. Limits in all casinos and for all games tend to be low. For example, most blackjack games are $3-$500 or $5-$500. About 75% of bets are $10 or less.

The gambling and drinking age in Panama is 18. Smoking is prohibited in indoor public places, including casinos. To that, I say Bravo to Panama!

The casinos are not sticklers on the rules, as they are in Vegas. While signs in both places may say, "chairs are for players only," that rule seems to be seldom enforced in Panama. They don't seem to mind when people sit at the tables for long periods of time without playing. It's pretty frequent that you'll see somebody just sitting and watching silently for over an hour. I also don't think players would have any compunction to leave their chips on the table and go have a meal in a restaurant. Speaking of meals, it is not unusual to see people eating at the machines or tables. Here is a summary of the games available.

Blackjack is the king of table games in Panama City, having an even greater percentage of tables than in the U.S., I would estimate. Here are the rules that all casinos seemed to employ:

This is a darn good set of rules, due mainly to the early surrender against a 10 and doubling allowed on three cards. The house edge I come up with assuming proper basic strategy is 0.12% with a continuous shuffler. That is better than the best game in Vegas.

I indicate the proper basic strategy in my page on Panamanian blackjack.

Card counters will be unhappy to learn that most games are on continuous shufflers. The few that are not have 1.5 to 2 decks cut off.

Keep your eyes open for promotions. While there one was paying 2-1 for a blackjack in spades, and another had a six-card Charlie rule.

I would say roulette is the second most popular table game in Panama. It was always double-zero.

The larger casinos will usually have one craps table open only during peak hours and it still won't get much attention at those times. The Veneto had 3-4-5X odds.

Baccarat is mostly relegated to the small high-limit rooms and played midi-baccarat style. It seems to only get play from Chinese players, of which there are a fair number in Panama City.

Canal 21 is a blackjack variant found in most Panamanian casinos with table games. Every casino seems to call it something different. The Crown calls it Canal 21, but everybody else calls it the name of their own casino followed by "21." For example the Majestic calls it "Majestic 21." I have not analyzed the game yet, but I posted the rules in my page on Canal 21.

A funny thing about the casinos is they are very consistent with game rules from place to place, but the name of same games can be different at every casino. Besides Canal 21, another example is Casino Hold 'Em. This is a poker variant I helped develop years ago but have never seen inside a casino before this trip. It can be found in most Panama City casinos with table games, but the name will vary. For example, some call it Texas Hold 'Em and others call it Hold 'Em Poker.

The larger casinos had small sports betting rooms, evidently franchised out to a company called Bet $ Win. They mostly offered lines on American sports at 10? lines, for example +140/-160. The Veneto casino had the best sports book, in my opinion, with lots of seats and television screens, right next to a balcony for smoking.

I didn't notice either.

Panama is a little slow to adopt the hot new games in Vegas. I indicate specifics in my casino descriptions below. My impression is that the players in Panama don't like trying new games and are happy with what they've got.

Here are some specific comments about each casino I visited. 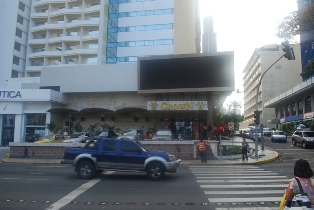 The Crown casino is associated with the Riande Continental, where I stayed. It was the first casino I ventured into in Panama City. As one should do in Las Vegas, I applied for a player's card before playing. There was a problem with the machine, and it took about 15 minutes to create my card. After all that fuss, when I sat down to play blackjack and tried to present my card to the supervisor, he just ignored it.

According to LCB, the Crown has 20 table games and 150 slots. The table games were blackjack, Canal 21, roulette, and craps. There were a few video poker games with the following pay tables. The returns shown in parenthesis assume optimal strategy. 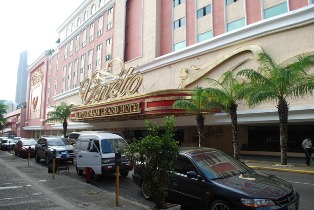 According to LCB, the Veneto is the largest casino in Panama City with 56 table games and 625 slots. Not only is the Veneto the largest, but in my opinion, also the best. This is because there is an abundance of beautiful Columbian prostitutes on the casino floor. It is a joy to just look at them. Weekends bring in a lot more customers, so the selection is not as good. I wrote a lot more about the Veneto in my previous blog entry, Confessions of a Cangrejo.

The table games at the Veneto were: 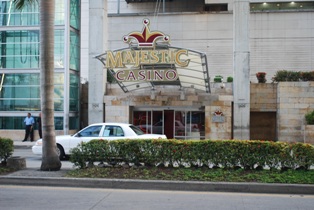 According to LCB, the Majestic has 36 table games and 489 slots. It is located adjacent to the Multicento Shopping Center and next door to the Radisson Hotel. The Majestic has the widest variety of table games, as follows: 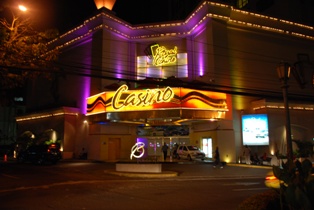 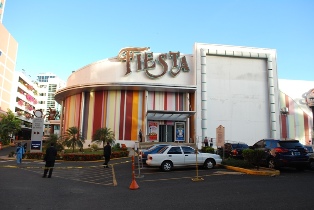 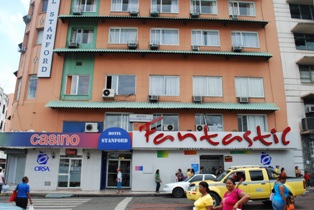 The Royal Casino is associated with the Marriott. According to Casino City, the Royal has 30 table games and 400 slots.

I have to apologize; I lost my notes from this casino. Suffice it to say they have the usual Panama City games and rules. A noteworthy exception is they were the only casino I found to have Spanish 21, although they called it something else — I don't recall what. It was one of the nicest casinos in the city with better cocktail service than I've seen elsewhere.

The timing of my visit was fortunate because a beauty pageant was going on. I wish I had some pictures to show you, because the girls were all very lovely. Unfortunately, I forgot my flash, so the pictures I took came out terrible.

The Fiesta is the casino associated with the Hotel El Panama. According to LCB, the Fiesta has 16 table games and 320 slots.

When I was there, they were doing a six-card Charlie promotion in blackjack, which lowered the house edge of 0.12% to a player edge of 0.04%. Outstanding! If it were not for all the beautiful working girls next door at the Veneto, I would have played at the Fiesta a lot more.

The Fiesta also played live free Salsa music. They had a large band with about eight musicians. I think it was probably the best free music I've ever heard. There was a dance floor by the stage, and the dancing was equally as good as the music.

This was a small, slots-only casino near the Plaza de Cinco de Mayo. It was quite crowded and had all video reel machines as I recall. According to Casino City, there are lots of Casino Fantastics in Panama City. I went to another one besides this one and it looked pretty much the same inside.

So, that ends my report. I hope if you find yourself in Panama City you'll be well prepared to hit the casinos now.