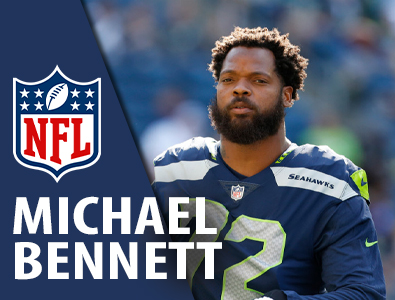 "Retiring feels a little like death of self, but I'm looking forward to the rebirth -- the opportunity to reimagine my purpose," Michael Bennett stated. "I would like to thank my wife and children, who have sacrificed so much for me to succeed. I'm looking forward to supporting them the same way they have me these past 11 years. I have never been more at peace in my life.

"As the great Toni Morrison said: 'Freeing yourself was one thing, claiming ownership of that freed self was another.'

Bennett was born in Independence, Louisiana, but he spent a significant part of his childhood growing up in Houston, Texas. Michael attended Alief Taylor High School in Houston, TX where he excelled at football, baseball, as well as track and field. In football Michael established himself as an amazing defensive lineman especially during his senior year of high school where he earned first-team All-District honors coinciding with his remarkable 110 tackles and 4 sacks. At that time, he ran a 4.79 second 40 – yard dash, and he was recorded at jumping 36.5 inches in the vertical jump too.

The strong willed and relentless defensive lineman decided to attend Texas A & M University located in College Station, Texas. While at A& M Bennett quickly became a leading tackler amongst their defensive unit. In 2005, Michael racked up 27 tackles, including 3.5 quarterback sacks, while seeing action in all 11 football games and starting in 4 ball games as a freshman. The following season in 2006, he made 27 tackles, including two sacks and 6 tackles for loss, forced 2 fumbles, and batted down a pass while seeing action in every game that year.

Bennett was selected to the honorable mention All – Big 12 Conference team in 2007 as he tackled 43 men and six of those for a loss of yards. At Texas A & M Michael played alongside his brother and fellow Aggie, Martellus Bennett, from 2006 to 2008. In 2008, Michael played in all 11 college football games as he registered 42 tackles with 12.5 for losses and 2.5 sacks. 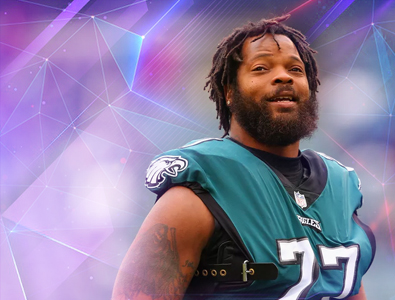 On April 27th, 2009 Bennett signed with the Seattle Seahawks as an undrafted free agent, but he was quickly moved to the Seattle Seahawks practice squad on October 10th, 2009 in order to make room for offensive tackle Kyle Williams. Two days later the Tampa Bay Buccaneers claimed Michael off of waivers in order for him to fill in for the injured Gerald McCoy at defensive tackle. Bennett's best season as a member of the Tampa Bay Buccaneers https://wizardofodds.com/online-gambling/sports-betting/tampa-bay-buccaneers-are-expected-to-sign-superstar-veteran-quarterback-tom-brady came in 2012 when he recorded career highs in tackles with 41, sacks with 9, and forced fumbles with 3.

On March 14, 2013 Bennett rejoined the franchise that originally picked him up, the Seattle Seahawks. He signed a one year contract with the Hawks reportedly worth up to $4.8 million, with $1.5 million in guaranteed money.

It did not take long for Bennett to become an intricate contributor the Seattle Seahawks defensive squad that ranked first in the National Football League in defense during the 2013 – 2014 NFL season. In 2013 the Seattle Seahawks ended up defeating the Denver Broncos in Super Bowl XLVIII making Michael a Super Bowl champion. Unfortunately, the Seahawks ended their 2014 – 2015 NFL season with a loss in Super Bowl XLIX to the New England Patriots in a nail bitter of a game that went down to the wire.

Bennett was selected to the NFL’s Pro Bowl in 2015, 2016, and 2017 before bouncing around to several different teams his last year or two in the NFL. He ended up playing for the Philadelphia Eagles in 2018, then the New England Patriots and Dallas Cowboys both during the 2019 – 2020 season of the National Football League. Now prior to the upcoming NFL season he has decided to hang up his cleats and enjoy life off of the gridiron as Michael officially announced his on Tuesday, July 21st, 2020 through an Instagram post. Below are Bennett’s NFL career stats that were definitely solid especially from 2011 to 2018.

Michael Bennett spent the majority of his prime with the Seattle Seahawks from 2013 through 2017. As seen below in the history of the Seattle Seahawks franchise Bennett helped make Seattle a serious contender with an impressive and dominating defense unit also known as the “Legion of Boom”. Other members of this amazing Seahawks defensive squad include Richard Sherman, Earl Thomas, Kam Chancellor, Brandon Browner, Walter Thurmond, Byron Maxwell, Bobby Wagner, K. J. Wright, Michael Bennett, Cliff Avril, Malcolm Smith, Brandon Mebane, Frank Clark, Chris Clemons, Bruce Irvin, DeShawn Shead, Jeremy Lane, Shaquill Griffin, Justin Coleman, and Bradley McDougald. Below I bolded the years of service that Michael Bennett was a big part of the Legion of Boom defense for the Seattle Seahawks.