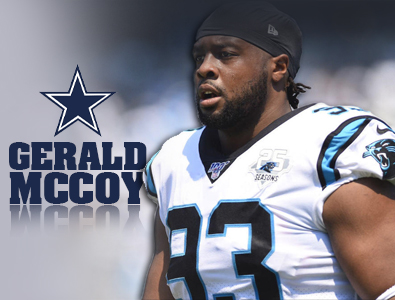 The Dallas Cowboys have agreed to terms with the free agent veteran superstar defensive lineman, Gerald McCoy, on a three-year contract. This new deal is worth up to $20.25 million, and it includes $9 million in total guaranteed money as well as a $3 million signing bonus.

His average annual salary will be $6,100,000, and the agreement has an opt out clause built in after the first year of the three year contract. McCoy is now scheduled to become an unrestricted free agent in 2023. This deal like all others is dependent upon him passing a physical examination with the Dallas Cowboys.

McCoy is exceptionally happy to join the Dallas Cowboys as the Oklahoma City, Oklahoma native grew up watching and supporting the Cowboys throughout his childhood. The Dallas Cowboys are getting a solid defensive lineman that is hungry to play for and be a part of a winning organization. The sack artist has yet to make the playoffs throughout his first 10 years playing in the National Football League.

The now six foot four inch three hundred pound defensive tackle previously attended the University of Oklahoma where he played for the Bob Stoop’s Sooners from 2006 to 2009. He was selected in the first round of the 2010 NFL draft by the Tampa Bay Buccaneers with the third overall pick.

Prior to the 2019 – 2020 NFL season the Buccaneers released McCoy in order to avoid having to pay the defensive tackle $13 million in 2019 and further payments in the future. As a free agent he decided to sign a one year contract with the Carolina Panthers valued at $10.25 million.

He was hoping to finally make the NFL playoffs last year, but the Panthers lost their final 8 consecutives games after beginning the season 5 and 3. The Carolina Panthers obviously did not qualify for postseason play after such a disappointing second half of their 2019 – 2020 NFL season. McCoy is now hoping to help the Dallas Cowboys make the NFL playoffs over the course of the next three years. 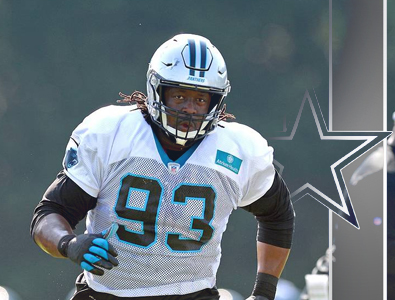 "Overall, it's the star," McCoy told Sirius XM NFL Radio. "I grew up two and a half hours away in Oklahoma City. Some portion of everybody at some point supported the Dallas Cowboys. Because it's all we had."

"It's almost like a dream come true to play for a team grew up watching," he added.

"It was really a no-brainer -- and they have so much talent," says McCoy. "It's just a perfect situation for me to finish up."

“I always try to find an edge, find an advantage,” McCoy goes on to say, “movement and snack, school time and just before one kid beckoned for technology help. So I YouTube great players and people who are great at what they do.”

“I don’t truly believe a coach or a team would go get a player that’s been in the league 10 years doing the same thing, playing his style of football, if they didn’t believe that’s what they needed on the team,” McCoy explained. “So the scheme don’t really matter to me.

“They’re bringing guys in who they know are just really good football players and they’ll make the system fit them. That’s why I say this is going to be really fun.”

“So scheme change?” McCoy says sarcastically. “I’m pretty sure I’ll be able to handle it.”

“How are you ill-prepared on game day?” McCoy proclaimed. “This is what you go against every day. I love competition. And I’m extremely excited to compete against those guys then bring it all together.”

"Practicing against them every day," McCoy expressed, "how are you ill-prepared on game day?"

“But that was because we knew the scheme we was going to be in, who our coaches was and all that jazz,” says McCoy. “Can’t do that now because it’s new to everybody.”

“I was talking to DeMarcus right before we got on the call,” McCoy stated. “He’s great. … When you played at the Pro Bowl or any type of all-star game with these guys and you’re like, ‘Man, if we only was on the same team.’ And then you get to be on the same team?

“It makes it that much better.”

"Overall, it's the Star," McCoy explained. "I grew up two and a half hours away in Oklahoma City. So, some portion of everybody at some point supported the Dallas Cowboys because it's all we had. The University of Oklahoma, which I ended up going to, was our NFL team.

"But the closest thing was the Dallas Cowboys. So that's just kind of what people went with. So it's almost like a dream come true to play for a team that I grew up watching and admired."

"It's gonna be a lot of fun," he said. "I believe we're gonna make a lot of noise. Prime time. That's what Dallas is. 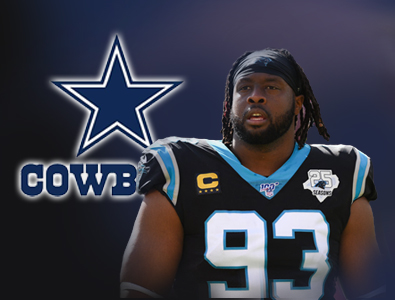 "America's Team. I've never been on a team of this magnitude. ...You mention the star and the Dallas Cowboys, they're on TV dang near every week."

"The thing I'm most excited about, I have to be honest, is playing a Thanksgiving Day game," McCoy states. "You grow up watching these games and you see Dallas plays one every year. This year I get to do it. It's going to be a lot of fun."

"I've always been a big fan of coach McCarthy," McCoy replied. "Had an opportunity to play for him at the Pro Bowl. Told him then how much of a big fan I was of him. My dad is a big fan of McCarthy.

"They have so much talent," says McCoy. "Unfortunately they couldn't put it together last year, but every year is different. I truly believe they have all the pieces necessary."

"I have never rotated as much as I did last year in Carolina," McCoy explained. "That's not what I was used to. I can play all game if I have to. ... I'm an every down guy.

"That hasn't changed, and I don't plan on it changing this year."