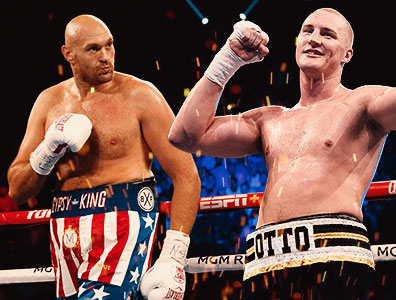 On Saturday, September 14th, 2019 Tyson Fury fought Otto Wallin with the linear heavyweight championship belt on the line. The fight was held at the T-Mobile Arena in Las Vegas, Nevada, and it was a great contest that went the distance.

This was a supreme boxing match that the scorecard does not even come close to explaining. This fight turned into a blood bath early on as Otto Wallin drew first blood by opening cuts around the eyes of Fury. The first drastic blow occurred late in the third round, and the blood streaming down Tyson’s face was very close to stopping the fight over the course of the following few rounds and pronouncing Wallin the winner.

Fury did an excellent job of protecting those cuts while he worked to get back into the fight throughout the second half of the boxing match. It would have only taken one good punch from Otto to either one of the two huge gashes to reopen the floodgates on those wounds resulting in a Wallin victory. Although Fury did not end up knocking out his south paw opponent, he won the majority of rounds by points from the 5th to the 12th earning him a hard fought win to defend his linear heavyweight title.

Prior to this contest, Fury had already signed an agreement to rematch Deontay Wilder in a heavily anticipated fight on February 22nd, 2020 in Las Vegas, NV. On the other side of the ring, Wilder, has a previous engagement with another boxer, Luis "King Kong" Ortiz. The date for that match has not been officially set, but as for now the fight is scheduled for November 23rd, 2019 also taking place in Las Vegas, Nevada.

The rematch between Fury and Wilder should be a good one if it goes down as planned. The first bout between these two ended in an absolutely controversial draw last December in Los Angeles, CA. During that boxing match Wilder scored two knockdowns, but was outfought by Fury for some decent and long stretches of the fight. I look forward to seeing these heavyweights give it their all come February as long as everything goes smoothly.

"It was a good performance. I got a good 12 rounds in," Fury stated. "It was a great fight. I got cut [in the third round] on the eyelid and [it] changed the fight completely. I couldn't see out of the eye, and there was a lot of [head] clashes. I am the 'Gypsy Warrior,' and this is Mexican Independence Day! Viva Mexico!"

"Once the referee ruled the cut was from a blow, it means if the fight was stopped he would have lost," says Top Rank promoter, Bob Arum. "He fought back with the blood, a lot of blood. I thought it was a great performance and a terrific fight. We knew the Swede wasn't a quitter. He was a hell of a fighter. And Fury is a real warrior."

"I did everything I could. I tried my best, and Tyson is a great champion," Wallin explained. "[The way I fought] tells me that no one can question my heart or question that I am a good fighter."

"Congrats to Otto -- and God bless his father and let him rest in peace," says Fury. "He would be very proud of Otto's performance. The Viking Warrior!"

"I tried to hit it even more," Wallin exclaimed. "I know it was a punch that did it. I was happy that he was cut, but I wish I could have put more pressure on it."

"It is all heart and determination," continued Fury. "If I can keep going, I will keep going. He's a tough guy. I hit him with some chin shots and some body shots, and he kept coming. He [was] undefeated, but tonight I was the man."

"Deontay Wilder, I want you next, bum! It is all preparation," Fury says emphatically. "I had a long time out of the ring, [but] next is the big boy, the big 'Bronze Bomber' on Feb. 22."

“Tyson Fury vs. Otto Wallin fight results: 'Gypsy King' survives massive cut to earn decision win - Fury was cut over his right eye for the first time since 2013, but rallied to get by Wallin in Las Vegas”, Brian Campbell, cbssports.com, September 15, 2019.