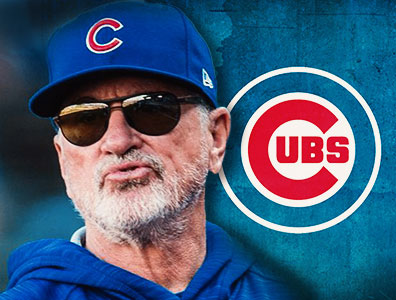 After another tremulous season, the Chicago Cubs and their manager, Joe Maddon, have decided to part ways and move on to the future. This news was announced just prior to the Cubs last regular season game against their rival the Saint Louis Cardinals who ended up winning the National League Central division this year.

Maddon had five amazing and memorable seasons in Chicago managing the Cubs. He helped pave the way for the Cubbies by helping them win 103 games in 2016 and eventually becoming victorious in the 2016 World Series against the Cleveland Indians in a hard fought series.

It seems as if this decision for the Chicago Cubs to move forward without Joe Maddon was a mutual agreement in which both sides felt satisfaction in the time that Maddon coached the Chicago Cubs. He will forever be loved and appreciated by Chicagoans for his leadership that was necessary to break the over 100 year curse and overcome the obstacles to finally win the World Series.

"We're both going to move on," Maddon stated. "Hopefully, the Cubs are going to flourish. Hopefully, I get a chance to do this someplace else. But there's no tears shed. It's a good moment for everybody. And we're both excited about our futures."

"It was a great night, kind of a bittersweet night," says Anthony Rizzo. "Just talking to Joe. He's in a good place."

"He's a living legend in this game, a bridge to the old and the new," Rizzo added.

"It's hard to express kind of how (it) feels. You kind of feel like it could be an end of an era," Ben Zobrist said. "When I look at my career, he's at the top. ... Joe's a special person. Those kind of people, let alone managers, don't come along very often."

"I can't say enough positives about what Joe has done, flat-out, for this organization," says Jon Lester. "Up until this year we led MLB in wins [over the past four years]. That's a testament to him. We broke a 108-year curse. ... He should be revered as a legend in this town for a long, long time."

"We haven't called to ask for permission on anybody," Epstein stated. "We're full speed ahead. We're not going to drag this out any longer than it needs to be, but we're also going to be thorough."

"David Ross has a lot of great things going for him," says Epstein. "His connection to the players on this team, and especially his connection to the 2016 team, are not necessarily assets that distinguish him or are important to us. ... Ross is an attractive candidate, and he's going to be evaluated on the merits."

"Please don't take anything I say as far as what we're looking for [in] a manager, at this moment in time, as any kind of critique at Joe [Maddon] because it's not," says Epstein. "He was the perfect guy for this team at the perfect time.

"At this moment in time, with this group, I think accountability is important. We were pretty mistake-prone this year. The next manager should be part of this. Helping to create a culture of accountability."

"Picking priorities and values to emphasize work is going to be important. For this group, at this time, we need to find a way to create a culture that compels every player to push himself to be the absolute best version of himself."

"I don't want to answer too specifically. If I get into a long list of specifics, then every managerial candidate that comes in will list every single specific that we say and think they aced the interview process."

"It's something you have to consider," says Epstein. "Lack of experience is a factor. It's not the determining factor."