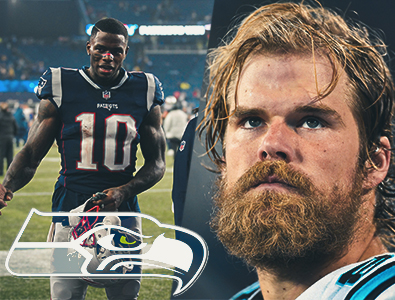 On Thursday, March 4th, 2021 the Seattle Seahawks decided to officially release both the troubled yet talented wide receiver Josh Gordon as well as the battle tested veteran tight end Greg Olsen. Although many other NFL franchises are making these type of difficult decisions as they are trying to trim the fat and clear cap space in order to optimize their team roster, these were easy decisions for the Seattle Seahawks. Gordon has joined another professional football league while Olsen has already announced his retirement from playing football in the National Football League on Sunday, January 24th, 2021.

Gordon has previously requested that the Seattle Seahawks release him as even though his contract was expiring it was still legally binding. Josh has ultimately decided to join the startup Fan Controlled Football League. He will be the next member of the FCF Zappers where he will once again reunite with his former quarterback while with the Cleveland Browns, Johnny Manziel. Both Manziel and Gordon have had multiple struggles with substance abuse in the past which has inevitably either suspended or ended their careers in the National Football League. It will be interesting to find out how they do in this new startup league.

This 35-year-old grizzled veteran tight end has finally made the appropriate decision to retire from playing football professionally in the National Football League. Olsen began his NFL career when the Chicago Bears selected him with the 31st overall pick in the first round of the 2007 draft. He played tight end for the Chicago Bears from 2007 to 2010 before being traded to the Carolina Panthers.

Greg was an offensive force for the Carolina Panthers from 2011 to 2019. After the Carolina Panthers released him in February of 2020, he signed a one – year $7 million contract with the Seattle Seahawks where he finished his NFL career last year during the 2020 – 2021 NFL season. Throughout his illustrious NFL playing career Olsen has recorded 742 receptions, 8,683 receiving yards, and 60 touchdowns. Now that he is moving on from playing pro football, he will not be very far away from game action as he will be joining Fox Sports as a full time broadcaster for this major national network.

According to Intertops sportsbook these are the odds to win Super Bowl LVI as of Friday, March 5th, 2021.