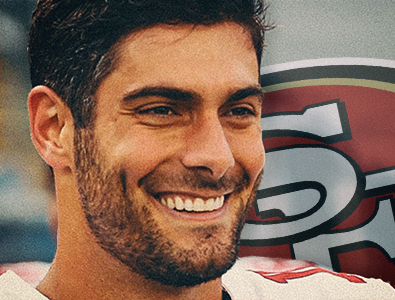 On Monday, December 27th, 2021 the San Francisco 49ers have announced that their very average starting quarterback, Jimmy Garoppolo, has suffered a torn ulnar collateral ligament of his right thumb and a fracture in his right thumb as well. Jimmy endured that injury early on in last Thursday Night Football’s game featuring the Tennessee Titans win over San Francisco 49ers with a final score of 20 to 17.

The San Francisco 49ers went back to practicing on Monday, December 27th, 2021 following a long holiday weekend minus their starting quarterback in Garoppolo. Jimmy’s status for the game this Sunday, January 2nd, 2022 against the Houston Texans is presently questionable.

Garoppolo just so happened not to participate in the San Fran Niners' Monday "bonus" practice, that came following the team going their separate ways for the 3 - days after the loss in Nashville, Tennessee last Sunday, December 26th, 2021. Rookie quarterback Trey Lance participated in all of the practice work with the number 1 team during Monday's training session, which the head coach of the San Francisco 49ers Kyle Shanahan explained as a walk - through.

According to coach Shanahan, Jimmy suffered his thumb injury when the Tennessee Titans defensive tackle, Denico Autry, sacked him which was good for a 7 - yard loss on the play with just 3 – minutes and 56 - seconds remaining in the 2nd – quarter of the contest. Garoppolo completed the match – up, but he grappled with a pair of troublesome interceptions as well as a missed touchdown toss to his open fullback, Kyle Juszczyk, during the 1st - half.

Shanahan stated that Jimmy was deterred by his injured thumb on the San Francisco 49ers 1st - offensive play of the 3rd – quarter which resulted in a pass targeted for their wide receiver, Deebo Samuel, that ended up sailing into the awaiting arms of the Tennessee Titans safety, Amani Hooker, for an interception that the Tennessee Titans ended up turning into the game - tying touchdown score of the game.

Garoppolo finished the contest against the Tennessee Titans by going 26 – of – 35 which was good for 322 - passing yards as well as a touchdown, and 2 – picks. Garoppolo earned a quarterback rating of 44.4 during this match up.

With Jimmy now on a day - to - day basis, Lance might be in line for his 1st - extended work with the # 1’s ever since prior to Week – 5’s loss to the Arizona Cardinals. If for some reason Garoppolo is not able to play this Sunday, Lance would make just his 2nd - career start against the Houston Texans.

Shanahan made it clear that the decision to play Garoppolo this Sunday will come down to how he feels come game time. As for Lance, Shanahan explained the overall # 3 – selection in the 2021 NFL Draft made solid progress while running the practice team as Kyle reemphasized his improved decision - making skills as well as his accuracy as the strong points among other things. 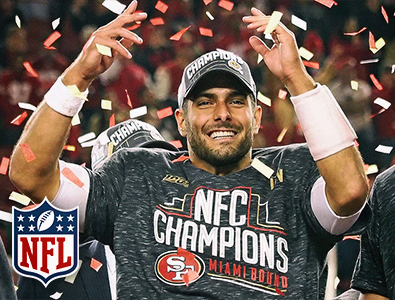 "We knew his thumb was hurting him. We thought he jammed it sometime in the game, so he tells us right when he comes to the bench. This last month of Trey has been his best consecutive four weeks at practice since we've had him," the head coach of the San Francisco 49ers Kyle Shanahan stated. "He's had a number of good days and he's had some bad days like most guys do, but as far as his consistency and stuff, I feel this last month has been his best."