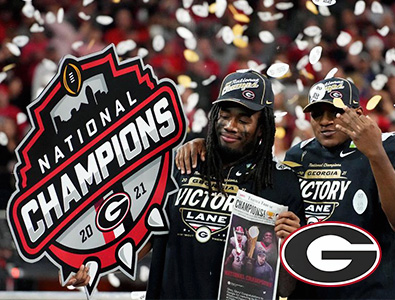 On Monday, January 10th, 2022 the University of Georgia Bulldogs emotionally defeated the University of Alabama Crimson Tide with a final score of 33 to 18 capping off the Georgia Bulldogs’ first NCAA College Football National Championship title since the 1980 – 1981 college football season. This was truly a well – deserved championship for all those involved in recent UGA history.

The first – quarter of the 2021 – 2022 college football playoff (CFP) national championship game featuring the Georgia Bulldogs and the Alabama Crimson Tide possessed only one score when the University of Alabama place kicker, Will Reichard, drilled a 37 – yard field goal during the 1st – quarter of play in this decisive game (3 to 0).

The first score of the 2nd – quarter came when the University of Georgia Bulldogs place kicker, Jack Podlesney, delivered on a 24 – yard field goal knotting the contest up at 3 to 3. Then Reichard returned the favor by hitting a 45 – yard field goal for Alabama putting them up 6 to 3. Reichard followed that boot up with another field goal (37 – yards) shortly after making it 9 to 3 in favor of the Crimson Tide. The final score of the 2nd – quarter as well as the first – half of this ball game came off of the foot of Podlesney as he netted a 49 – yard field goal pushing the score to 9 – 6 with the Alabama Crimson Tide leading at halftime.

The third – quarter of play featured the game’s first touchdown as Zamir White punched in a 1 – yard touchdown rush capping off the Georgia Bulldog’s 4 – play and 80 – yard scoring drive. The score was now 13 to 9 in favor of Georgia who enjoyed their first lead of this extremely exciting NCAA football match – up on Monday night. 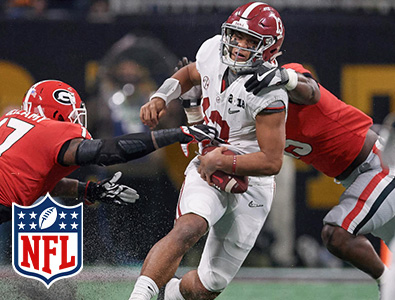 Scoring in the fourth – quarter resumed in the CFP finale as Reichard nailed a 21 – yard field goal (Georgia 13 – Alabama 12). Then Cameron Latu scored a touchdown on a 3 – yard TD pass from quarterback Bryce Young as Alabama regained the lead 18 to 13 on this scoring drive.

The next score of the National Championship game belonged to Adonai Mitchell as he caught a 40 – yard TD pass from Georgia’s undersized quarterback, Stetson Bennett (MVP). The score was now 19 to 18 in favor Georgia. Then Brock Bowers received a 15 – yard touchdown pass from Bennett making it 26 to 18 in the way of the Bulldogs.

As Young attempted to bring Alabama back into contention he lofted an ill – advised pass that was intercepted by the Georgia defender, Kelee Ringo, who returned the pick – 6 for a 79 – yard touchdown pushing the score of the game to 33 to 18 in favor of Georgia. That eventually was the final score of this highly – competitive defensive battle from Lucas Oil Stadium located in Indianapolis, Indiana on Monday, January 10th, 2022 as the Georgia Bulldogs pulled off the amazing upset over the Alabama Crimson Tide.

"I told the guys in the locker room, just take a picture of this, because I think back to the '80 championship picture and seeing all those players and the Frank Walkers and the Herschel Walkers and all these people that have reached out and said things," the Georgia Bulldogs head coach Kirby Smart expressed. "Our guys have accomplished that, something special, and as they say, they've become legendary, and I want that for them."

"That was the group that was crying in the locker room," Smart goes on to say as he was referring to the 2018 UGA team that included former players such as Nick Chubb, Richard LeCounte, and D'Andre Swift. "This group made it right for them."

"I hadn't cried in -- I don't know, years -- but that just came over me," explains the University of Georgia starting quarterback Stetson Bennett who eventually was named the Offensive Player of the Game. "That's what -- when you put as much time as we do into this thing, blood, sweat, tears, it means something."

"I love Kirby," the head coach of the Alabama Crimson Tide, Nick Saban, declared. "I think Kirby has a lot of respect for us. He did a great job for us for a long time. If we had to lose a national championship, I'd rather lose one to one of the former assistants who certainly did a great job for us and has done a great job for his program and his team. I'm really proud of him. And I'm proud of the way he's been able to coach his team and the consistency that they've played with all year."