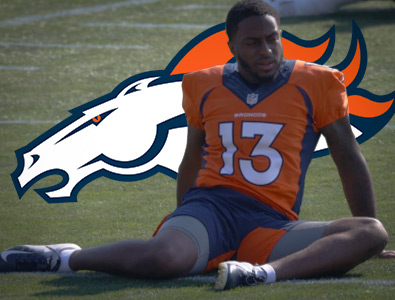 On Monday, September 27th, 2021 the Denver Broncos announced that their young stud wide receiver, K. J. Hamler, suffered a torn ACL during last Sunday afternoon’s game against the New York Jets. Hamler will unfortunately have to miss the remainder of the 2021 – 2022 NFL season due to this recent devastating injury for the Denver Broncos.

On Sunday, September 26th, 2021 the Denver Broncos went on to defeat the New York Jets with a smack – down of a final score consisting of 26 points to 0 points in favor of the Denver Broncos from Empower Field at Mile High Stadium located in Denver, Colorado. Unfortunately, during the Denver Broncos first home game as well as first home victory during the young and grueling 17 – game 2021 – 2022 NFL regular season they lost one of their biggest offensive play – makers in their wide receiver, Hamler.

The torn ACL injury endured by K. J. Hamler occurred with 3 – minutes and 38 – seconds to spare in the second – quarter of last Sunday’s dominate Denver Broncos win over the struggling New York Jets. Not only did he tear his ACL after leaping in attempt to make a great catch for the Denver Broncos, but K. J. also incurred other severe damage to that same knee during the play according to the Denver Broncos’ head coach, Vic Fangio.

Hamler was averaging exactly 14.8 yards per reception over the first 3 weeks of the 2021 – 2022 NFL regular season which just so happens to be the best amongst any of the Denver Broncos’ wide receivers or other pass eligible receivers with more than 1 reception so far this year. Now K. J. is just the Denver Broncos 2nd big – time wide out to have endured a significant injury already this year.

The other Denver Broncos’ wide receiver to suffer a major injury this season was Jerry Jeudy. Jeudy is currently sidelined on the injured reserve list after a serious right ankle injury that occurred at Met Life Stadium located in East Rutherford, New Jersey during the season opener for the Denver Broncos in their week 1 win against the New York Giants.

Coach Fangio is also unopposed to bringing in other available NFL wide – outs that are currently unsigned free agents, but only time will tell how the Denver Broncos eventually decide to fill out their depth chart at the wide receiver position for the rest of the 2021 – 2022 NFL season. Jeudy is expected to be back able to participate in football activities once again after recovering from his high ankle sprain over the upcoming 2 to 4 weeks from now. 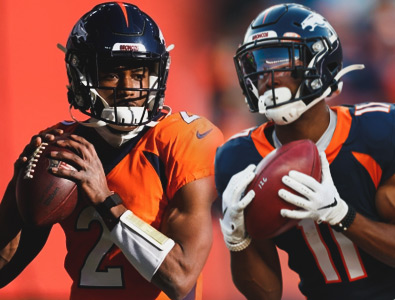 " ... KJ's a hard guy to cover. The key third down [in the first quarter against the Jets], we made the conversion; they were in man coverage. The guy was nowhere near him. ... He's hard to cover. We'll miss him,” the head coach of the Denver Broncos, Vic Fangio, exclaimed. “We don't like to see anybody get hurt, just on a personnel basis, before you even start thinking about the football part of it,'' Fangio goes on to say. "But, yeah, it's getting tested too early, but we are a deeper team than we've been in the past and think we can absorb it.''

"It hurts because he was, out of all of us, he was different in that he gives us speed,'' the wide receiver of the Denver Broncos, Tim Patrick, said. "There's definitely no replacing KJ ... but you [try] replacing him by making plays. ... It might not be in the way that he would do it, but there is other ways of making big plays.''

Hamler’s one and only major football career accomplishment involves him being named to the Second – Team All – Big Ten back in 2019 when K. J. was playing NCAA college football for the Penn State Nittany Lions. I am sure there will soon be other achievements, honors, and awards to add to this short list in the near future as long he stays healthy and continues to work hard at his craft in the National Football League.