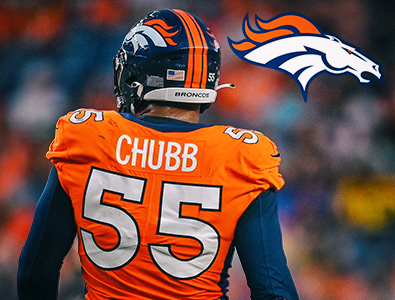 The Denver Broncos outside linebacker as well as defensive leader Chubb had to leave the game when he felt a “stab type pain” in his ankle following an aggressive pass rush move made by Bradley with only a minute left in the second quarter of the football game vs. the Jacksonville Jaguars. Initially Chubb attempted to walk off the field under his own power, but he quickly fell to his knees just before needed assistance in order to be helped over by others to the Denver Broncos bench on the sidelines of the gridiron.

Chubb had previously had to miss multiple practices missed during the later portions of the Denver Broncos training camp this past summer of 2021. Bradley was unable to play in the season opener when the Denver Broncos defeated the New York Giants on the road with a final score of 27 to 13. Both the Denver Broncos and Chubb were hoping that some solid rest and treatment by the team physicians would "settle it down” (the ankle injury).

The Denver Broncos' team medical staff has already consulted with Dr. Robert Anderson, who just so happens to be a noted foot and ankle specialist who has previously performed surgical procedures on a very long list of the highest profile players in the National Football League. In the opinion of the good Dr. Anderson surgery was decided was the best action to take for the long – term well - being of Chubb and his left ankle that is currently keeping him off of the Football field for the Denver Broncos. The fourth - year veteran will most likely be moved over to the NFL’s injured reserve list, and Bradley’s recovery time is expected to be approximately 7 to 8 weeks as long as his recovery goes to schedule and stays on track with no setbacks.

The Denver Broncos veteran starting linebacker Bradley Chubb told the Denver Bronco's official website that, "I tried to turn the corner and it wasn't all the way there (on the play he was injured). We're 2-0 ... and I know these guys are doing everything they can to keep that win streak going. I just wish I could be a part of it. But I know I'm going to be back on the back end of [the season] and making that playoff push. I'm excited about that."

"He tried to go with it," the Denver Broncos head coach Vic Fangio explained last Monday, September 20th, 2021. "He had medical clearance. He wanted to do it. It acted up again."

When asked Monday if he had given consideration of holding Chubb out the lineup a little longer, Fangio said: "Not really, cause the medical people thought it was basically going to be the same yesterday as it would be next Sunday. They felt good about letting him play, he felt good about playing. So, he played.''

Over the course of Chubb’s NFL as well as NCAA college football career, he has accomplished quite a bit. These are Chubb’s football career achievements, honors, and awards: he was selected to the NFL’s Pro Bowl in 2020, PFWA All - Rookie Team in 2018, Bronko Nagurski Trophy in 2017, Ted Hendricks Award in 2017, ACC Defensive Player of the Year in 2017, Unanimous All - American in 2017, First - Team All - ACC in 2017, and his jersey number 9 was honored by the North Carolina State Wolfpack.

This is the type of attitude you would like from one of your leaders. Although Bradley Chubb has an upcoming ankle surgery, he wants to be out on the field helping his Denver Broncos try to win games. Chubb is an ultimate defender and his services will most certainly be missed during the time Bradley has to be out due to this injury and the surgical procedure in order to correct his messed – up ankle. The Denver Broncos should love this mentality and feed off of Chubb’s determination to play, play hard, and be out on the field winning games at all costs.