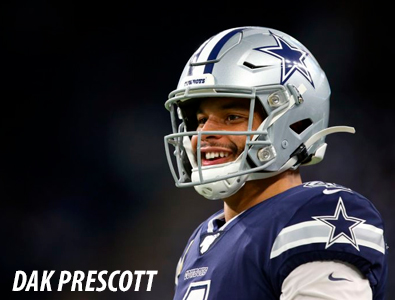 On Sunday December 22nd, 2019 the Philadelphia Eagles are hosting the Dallas Cowboys at Lincoln Financial Field in Philadelphia, Pennsylvania. As both the Eagles and the Cowboys are tied with a record of 7 and 7, the NFC East division is completely up for grabs between these two storied franchises with only 2 regular season games left in the 2019 – 2020 NFL season.

The NFC East champions will not only make the playoffs, but they will host a division round playoff game in the NFL postseason. The team that finishes second in the division will be eliminated from post season play so a lot is riding on the next two games for Dallas and Philly.

The Dallas Cowboy’s starting star quarterback Dak Prescott suffered a sprained right shoulder last week during a game against the Los Angeles Rams. The Dallas Cowboys defeated the Rams 44 to 21 in that contest. Prescott played through the excruciating pain last week, and he fully intends to do the same this Sunday in the huge NFC East rivalry match up versus the Philadelphia Eagles. Although, he is listed as questionable on the injury report today there is no secret he will be starting at quarterback in this week’s battle with Philly.

Prescott suffered similar injuries "every other week" while playing in College at Mississippi State University according to Dak Prescott. Due to the fact that this shoulder sprain is on his throwing arm the pro bowl quarterback will not wear any additional protective gear as to not hinder his passing motion. He will most likely receive a pain killing injection from his medical staff prior to this week’s game.

We will see how the sprained shoulder affects his passes throughout the remainder of the NFL regular season. I would imagine that if the Dallas Cowboys clinch the playoffs this week that they will keep Prescott out of game action the following week against the Washington Redskins to rest him for their postseason run. The Dallas Cowboys will definitely benefit from having a solid running game with their All Pro rusher Ezekiel Elliot. I expect the Cowboys game plan to involve a good deal of runs to help open up the passing game especially on short routes. Look for Philadelphia to try to key on the run and force Prescott to beat them through the air downfield.

"I'm getting better, simple as that," Prescott stated. "Mobility, function of it, it's all improving. That's the key. That's the goal."

"It's frustrating. I'm a guy that likes to be in the action," Prescott explained. "I don't like to sit back, don't like to take any reps off, but it's good mentally. It's always fun just challenging yourself, and right now it's just a mental challenge. Same preparation in the game plan, if not doubling down, since I don't get those physical reps."

"He's communicating when we're in meetings," says Cowboys tight end Jason Witten. "We're talking a lot, he runs the meetings this afternoon, does it all week. I think he's been above and beyond in all of those aspects. It's just those 35, 40 passes you throw in a week you're not getting from, him but he's constantly communicating, so I don't think that's an issue."

"This is what you play the game for," Prescott replied. "When I was a little boy and dreamed about being the quarterback of the Dallas Cowboys, this is the situation you thought about being in and excited for this moment, this opportunity for our team."